Josh Kovacs (Ben Stiller) manages a highly exclusive apartment building full of wealthy tenants. When one of the wealthiest, Arthur Shaw (Alan Alda) is arrested for fraud Josh is devastated – he asked the man to invest the pension fund for all the building’s employees, and now the money is gone.

Josh and some other employees use their knowledge of the building to break in during the Thanksgiving Day parade so they can steal a stash of cash they think Shaw has in a secret safe. The safe is there, and they open it, but it is empty.

However, they realize that Shaw does have the money hidden – his prized possession is a vintage Ferrari which he keeps in the apartment, and which is made of solid gold painted to look like a normal car. They lower it to another floor using a crane, then try to take it down by putting it on top of the elevator.

They are caught, but manage to hide the car somehow, baffling the cops. Josh agrees a deal – he will do two years in prison for the crime if all the others get immunity. In return, he gives the cops Shaw’s ledger, which he found in the Ferrari, and which details all his crooked dealings.

As it turns out, they hid the Ferrari in Shaw’s rooftop swimming pool. The film ends with all the employees getting big chunks of gold in the mail. 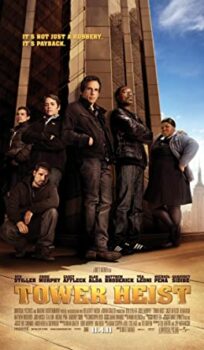