Billy Ray (Eddie Murphy) secretly finds out from the Dukes (Ralph Bellamy & Don Ameche) about the $1 bet they made over him and Louis (Dan Aykroyd), as well as how they plan to get rid of them both from the company after New Year’s. Angered, Billy Ray tracks Louis down, stops him before he can kill himself, and takes him back to his house and informs him of the bet. They – along with Ophelia (Jamie Lee Curtis) and Coleman (Denholm Elliott) – agree to get back at the Dukes by making them poor.

They learn that the Dukes will be buying a copy of a top-secret orange crop forecasts report from their crony Beeks (Paul Gleason) – who is delivering it to the U.S. Department of Agriculture – two days before it goes public, and with the information corner the entire frozen orange juice market. They find out Beeks’ travel plans and go on his train, where a costume party is happening. They put on costumes to get close to him, but Beeks soon figures out who they are and draws a gun on them. He takes them into the cargo hold to kill them, but a gorilla in a cage there knocks him out before he can. They take a gorilla costume from a partygoer that Beeks knocked out, put it on Beeks, and lock him in the cage with the gorilla. A disguised Billy Ray then meets the Dukes and gives them a fake copy of the report.

The four pool their money together, and Billy Ray and Louis head to the commodities trading floor of the New York Stock Exchange, where they short-sell orange juice futures and earn an enormous fortune while the Dukes go broke. Billy Ray and Louis reveal to the Dukes that they waged on whether or not they could get rich at their expense, and Billy Ray won, winning $1. Randolph Duke suffers a heart attack from shock.

The movie ends with the still-costumed Beeks being sent to Africa along with the gorilla, and Billy Ray, Louis, Ophelia & Coleman enjoying a luxurious tropical vacation. 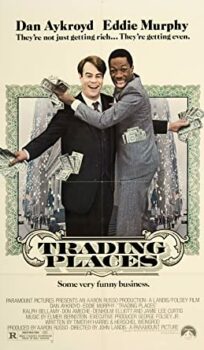