Pooper:
Amy gets a job with Vanity Fair wins back Aaron’s heart.

Long Ending:
Amy (Amy Schumer) and her sister Kim (Brie Larsen) are raised by their single mother after their dad Gordon (Colin Quinn) divorces. Gordon is anti-monogamy and an admitted asshole, but he genuinely loves his daughters.

Many years later, Kim is married, pregnant and has a stepson. Meanwhile, Amy lives a wild life of nightly hookups, heavy drinking and a lot of pot smoking. Although Amy tries to avoid relationships, she remains very close to Gordon (who is in a nursing home) and Kim. She works for a gossip magazine run by a self-centered and eccentric boss named Dianna (Tilda Swinton). Dianna tells Amy to write a profile of a doctor named Aaron (Bill Hader), who specializes in surgeries for pro athletes.

Amy and Aaron end up hitting it off and have sex. Araron’s best friend LeBron James (himself) encourages Aaron to pursue a relationship with Amy. He manages to win her over. For the first time ever, Amy genuinely likes a guy and decides to give a fully monogamous relationship a try.

Things take a turn for the worse when Gordon passes away from a medication overdose (he was hoarding medicine). Amy and Kim have a big fight as Amy doesn’t appreciate Kim’s family or life decisions. Dianna tells Amy the story on Aaron is cancelled because Dianna finds Aaron too boring. Aaron is given a big award at a ceremony and Amy is forced to miss his speech when Dianna threatens to fire her if she doesn’t pick up the phone in the midst of Aaron’s speech. That night, she and Aaron have their first big fight instigated by her answering her phone. It lasts so long that Aaron is unable to perform a groundbreaking surgery the next day due to being too tired and emotionally drained. Aaron asks Amy if they can take a small break, but Amy dumps him instead. As she does, she insults Aaron by telling him that he is too boring for her magazine and saying he should date the cheerleaders he performs surgeries on (and of whom she is jealous).

Amy goes out that night to resume her former ways. She lets Donald (Ezra Miller), an intern at her office, take her home. Donald tries to have kinky sex with Amy that eventually results in her punching Donald in the face. The noise causes Donald’s mom to barge in on them. It turns out that Donald is only 16. As a result of Amy’s poor choices, Dianna fires her.

Amy goes to Kim’s house and reconciles with her sister and in-laws. Kim’s stepson helps Amy realize that she still is madly in love with Aaron. Wanting to change her ways, Amy gets rid of all of her alcohol and pot. She then finishes her profile on Aaron and gets it published in Vanity Fair (a major magazine). Finally, with the help of the athletes and cheerleaders she met through Aaron, Amy learns a cheerleading routine. She performs it alongside the Knicks cheerleaders as an apology to Aaron. The pair embrace and begin dating again. 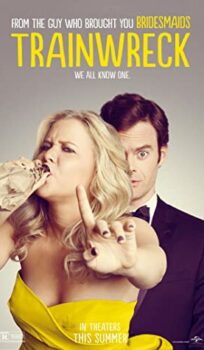