POOPER
The transcendence was Will all along. He was doing what he did to help save the world, which is what Evelyn wanted all along. Max’s virus is successfully uploaded, killing Will, Evelyn, and Will’s transcendence. However, the virus also destroys the internet and all technology connected to a computer, ending modern-day civilization as we know it.

LONG VERSION
Dr. Will Caster (Johnny Depp) and his wife Evelyn (Rebecca Hall) are Berkeley, California-based scientists who are working in the field of artificial intelligence. They are part of a team that has developed a sentient computer that is capable of creating a technological singularity, or transcendence as Will calls it, that will make the world a better place. Evelyn wants to use it to save the world, but all Will wants is to understand it. However, there is an anti-technology group known as Revolutionary Independence From Technology, or RIFT, that is against mankind’s dependence of technology, and is willing to use terrorist tactics to prevent further technological growth. In a series of coordinated attacks, several computer labs are destroyed, killing numerous programmers, and Will is shot in an assassination attempt. Will survives the shooting, but learns the bullet was laced with polonium and he will die of radiation poisoning in about a month.

A desperate Evelyn comes up with the idea to upload Will’s consciousness to the computer so he can be live on in the virtual world. Their best friend and co-worker Max (Paul Bettany) is leery of the plan but agrees to help. Shortly after the upload is complete, Will dies. Much to Evelyn and Max’s surprise, the upload was successful and Will is able to communicate to them through the computer. Almost immediately, Will says that he needs more power and needs to be connected to the internet to survive. This request scares Max, and he questions Evelyn if the intelligence they are talking to is really Will. She kicks Max out of the lab and begins to connect the computer to the internet. Later, Max is kidnapped by RIFT and meets their leader Bree (Kate Mara). She tells him that they agree with what Max has written in the past, that basically says that computers need to work with mankind, not in place of them. Max doesn’t agree with their tactics, but he soon agrees to work with them. RIFT then goes to Evelyn’s lab in an attempt to destroy the computer before Will can be connected to the internet, but they arrive too late and Evelyn has escaped.

Now connected to the internet, Will is able to send information about RIFT to the FBI, and they use it to arrest several RIFT members, but Bree is able to get away. Will is also able to put millions of dollars into Evelyn’s bank account, and she uses it to buy an entire town in the middle of nowhere called Brightwood. In Brightwood, Evelyn oversees the construction of a solar farm that will power not only Will on the computer, which he refers to as his transcendence, but also an underground laboratory that will be used to advance numerous scientific endeavors in the fields of medicine, biology, energy, and nanotechnology. Two years later, the lab is finished. In that time, Will has learned everything he can in those fields, and he is ready to take everything public. This comes in the form of Martin (Clifton Collins, Jr.), a construction worker who was brutally mugged and left for dead. Taken to the lab, Will’s transcendence works on Martin and not only saves his life through nanotechnology, but he makes him much stronger. Video of the enhanced Martin goes viral, and soon many people with disabilities begin arriving in Brightwood.

The government soon begins to take an interest in what’s happening in Brightwood. They send Joseph Tagger (Morgan Freeman), a former co-worker of Will’s who now works for the government, to Brightwood to meet Evelyn. She introduces him to Will’s transcendence and they show him that everything they are doing is to make the world a better place. Tagger returns to the government and tells them what he saw, They decide that Will needs to be stopped, and they will team up with the remaining members of RIFT to achieve that goal. They will also use RIFT as a scapegoat in case anything goes wrong. Meanwhile, Evelyn is beginning to question what Will is doing. She learns that when Will “enhances” people, he also connects them to his transcendence, making him able to communicate to her through anyone. Will also shows her that he is using nanotechnology to create body parts and will soon be able to make artificial life forms. He also has allowed his nanotechnology to infiltrate the atmosphere and is spreading around the world in the form of nano-particles inside raindrops. She flees the lab, and is quickly apprehended by the government. She shares her concerns about Will and eventually agrees with them that he must be stopped. The only way to do so is to delete his source code through a computer virus that must be uploaded on site. Evelyn decides to inject herself with the virus, and then let Will upload her consciousness to the computer and infect it. However, since Will is connected to the internet, the virus will also destroy the internet and any technology connected to a computer.

Evelyn returns to the lab, and sees Will in human form. He tells her that the body parts she saw were of him, so they can be together again. He is also aware that she is carrying the virus and intends to destroy him. The government and RIFT, realizing that Will knows she has the virus, begin to attack the solar farm with artillery. One of the bombs hits Evelyn, mortally wounding her. Will takes her to the lab, while he uses his connection to the townspeople to have them stop the troops, which they do. In the lab, Will is forced to choose whether to heal Evelyn’s body or upload her consciousness to the computer so they can be together forever, but would also upload the virus. When Bree points a gun at Max and makes him choose between uploading the virus or seeing his friend die, Will chooses to save the lives of the people he cares about and begins to upload Evelyn’s consciousness and the virus. By making this choice, Evelyn realizes that it was Will in the computer all along. He was doing what he was doing to make the world a better place for her, and to understand it better for him. When the upload completes, Will, Evelyn, and Will’s transcendence all die, but the virus also permanently takes down the internet as well as all technology attached to a computer. ending modern-day civilization as we know it.

The movie ends three years later. Civilization has moved on to life without modern-day amenities, such as electricity and communications. Max has returned to his home in Berkeley, and one day walks to Will and Evelyn’s old house. Before he was shot, Will had built Evelyn a garden for her beloved sunflowers that doubled as a Faraday Cage (an area safe from electrical fields or other such interference). Max goes to that garden and sees the sunflowers are still blooming. Max sees a drop of water fall from the flowers and instantly clean the ground it lands on. Max then realizes that the cage has protected a sample of Will’s nano-particles. 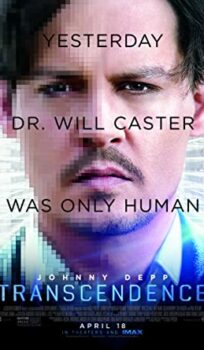