POOPER:
Hiram and the townspeople successfully kill all of the Dirt Dragons (a.k.a. Graboids), then promise never to tell anyone about them.

LONG VERSION:
Set in 1889 (100 years prior to the events of the first film), a silver mine near the town of Rejection is attacked by an unknown creature, killing 17 miners. With the mine abandoned, most of the townspeople pack up and leave. The mine’s owner, Hiram Gummer (Michael Gross), comes to town to find out why the mine is closed. While at the mine with Juan, one of the surviving miners, and two other townspeople, they are attacked by underground creatures (called Graboids in the earlier films). The two townspeople are killed while Hiram and Juan run onto a pile of rocks. It’s here that they figure out that the creatures have no eyes and are attracted to sounds. Juan is able to kill one of the creatures with a pickaxe. They return to town and tell the remaining townspeople (Christine the innkeeper, Tecopa the Indian, and the Chang family who run the general store) what they discovered.

Realizing that they cannot fight these creatures they dub Dirt Dragons, Hiram telegraphs for a hired gunslinger. Black Hand Kelly (Billy Drago) answers the call and he agrees to the job with all the silver he can carry from the mine as payment. Kelly, Hiram, and Juan travel to the mine to kill the Dirt Dragons, but they have moved on. They do find four hatched eggs, and they figure out that there are three remaining after Juan killed the one earlier. They make their way to a nearby muling station to spend the night, believing that the large floorboards will protect them. The next morning, the Dirt Dragons arrive and begin to pull away the floor boards, while Juan telegraphs Rejection for help. Christine arrives to rescue them, but one of the creatures has killed Kelly.

Back in Rejection, Hiram packs to leave and encourages the others to do so as well, but they refuse to leave their homes. Hiram goes to nearby Carson City to take the train back east, but then he learns from the telegraph operator that the town of Rejection is joking with him, claiming that giant worms are approaching the town. Suddenly feeling guilty about leaving those people to die, Hiram goes to a local gunsmith and buys out the store, then brings all of those weapons and ammo back to Rejection to help fight the Dirt Dragons. They set up traps for the creatures then lure them in with a large metal triangle.

Hiram kills one of the Dirt Dragons by shooting it with a punt gun (a hand-held cannon) while Tecopa kills another one by putting a band saw in the ground and getting a Dirt Dragon to run into it. The last one is smart enough to avoid the traps and is able to corner Christine and the Changs on a wagon. With the creature’s tongue caught on a wagon wheel, Hiram, Tecopa, and Juan tie a rope to the Dirt Dragon’s tail and use a steam engine to pull it away. The creature is dragged into the engine and killed by the spinning wheel.

The final scenes take place a short time later. Hiram plans to reopen the mine, but he makes the townspeople promise they will never tell anyone about the Dirt Dragons, fearing their existence will drive away any potential settlers. They also rename the town Perfection. The movie ends with Christine, now in a relationship with Hiram, giving him a Gatling gun in case the creatures return. This begins the Gummer family obsession with weapons. 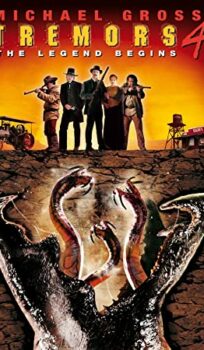