POOPER:
Earl, Burt, Grady, and Kate kill all of the Shriekers, but also destroy the oil refinery.

LONG VERSION:
Earl (Fred Ward) and Val became rich and famous following the events of the first film. Val is now married (presumably to Rhonda), but Earl lost all of his money in bad investments and is now running an ostrich farm. One day, the owner of a Mexican oil refinery approaches Earl about going to Mexico to hunt the Graboids that are killing his employees. He had talked to Val, but he refused to go. Earl also says no, until Grady (Christopher Gartin), the cabbie who brought the owner to Earl’s farm, tells Earl that the owner said he is willing to pay $50,000 for every Graboid that is killed. Earl changes his mind and says yes, and Grady says he’s going with.

At the refinery, the duo use dynamite attached to radio controlled cars that the Graboids eat to kill about a dozen of the creatures. They realize that there are more creatures than they can handle, so Earl calls Burt Gummer (Michael Gross), a fellow survivor from the first film, to help them. Burt arrives with an army truck full of weapons and bombs, and the three of them are able to take out several more Graboids. One creature surfaces in front of Earl and Grady, which causes them to damage their truck. While waiting for one of the employees to come pick them up, they find that this Graboid is not moving and making a shrieking sound. They find it has died and something came out of it. They also hear more shrieking in the distance, and realize that all of the Graboids are dying.

The next morning, they see an employee’s truck in the distance but not moving. They hike to it, only to find just the employee’s arms and the truck destroyed. They then hike to a nearly radio transmitter to call for help again, but it too is destroyed. They then see a bar and walk to it to get a ride back to the home base, but no one is there. They then come across a new creature that looks like a Graboid, but has legs and shrieks. Earl and Grady kill it, but three more show up. Grady is able to hotwire a car next to the bar and they get away. Meanwhile, Burt is driving back to home base and is ambushed by several of these creatures he calls Shriekers, but is able to get away after killing several of them.

All three arrive back at home base at the same time, only to find all of the remaining employees dead except for the resident geologist Kate (Helen Shaver). The four of them are hiding from the Shriekers when they realize that these creatures are blind and deaf, but can sense heat. That’s why they attacked the trucks and radio transmitter. They also figure out that they reproduce after eating. Burt is able to trap all of the Shriekers in a garage, but that garage doubles as the pantry, so the Shriekers are eating everything in it and are multiplying rapidly. After spraying himself with a fire extinguisher so they can’t sense him, Earl enters the garage and sets a bomb, which will destroy the entire contents of Burt’s army truck. The group barely escapes the area just as the bomb explodes, killing all of the Shriekers but also destroying the refinery.

The movie ends with Grady telling Earl that the refinery owner still owes them money for killing the Graboids. Earl says they should charge for the Shriekers they killed too. Earl and Kate, who had hit it off earlier in the film, become a couple. 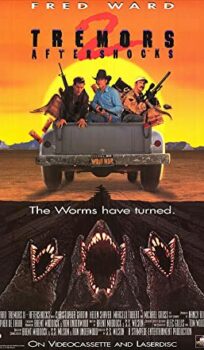