After it kills some people, the first of the “graboids’ is killed when Valentine (Kevin Bacon) and Earl (Fred Ward) get it to chase them and have it smash into a stone wall, but they learn from Rhonda (Finn Carter) that based on her seismographic readings that there are 3 more around. Burt (Michael Gross) kills the second with an elephant gun, Earl kills the third by getting it to swallow one of Burt’s homemade bombs, and Valentine kills the last one when he gets it to chase him to the edge of a cliff, and he jumps aside before the graboid can get him and it burrows over the edge of the cliff and splatters onto the jagged rocks below. Later, as Rhonda and Valentine & Earl prepare to leave Perfection for elsewhere, Valentine, who has fallen for Rhonda, kisses her before the end credits roll. 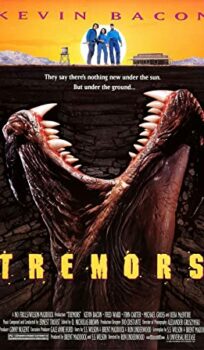