The film is anthology film that goes back and forth between different stories. Here are the endings in the order they are concluded.

At the end of Halloween night, Emma (Leslie Bibb) openly speaks of her dislike of the holiday, while her boyfriend Henry (Tahmoh Penikett) tries to get her respect the traditions. This raises the ire of the Halloween demon Sam, and he kills Emma by hiding in a ghost decoration and stabbing her neck with a sharpened lollipop. Henry later comes outside and finds and finds Emma’s body parts hanging with the other decorations.

Principal Steven (Dylan Baker), kills a student of his and buries the body in the backyard, while trying to avoid the suspicions of his neighbour Mr. Kreeg (Brian Cox) and (apparently) his young son. Afterwards he goes with his son to make a Jack-O-Lantern, which turns out to be made out of the student’s head. Earlier in the story, Sam is seen with Trick or Treaters.

A group of kids visit a quarry where a school bus full of mentally disturbed kids crashed. They play a mean trick on Rhonda (Samm Todd) by pretending to be the re-animated corpses of the kids. However, the actual re-animated corpses emerge from the the water and the kids beg Rhonda to let them into the lift out of the quarry. However, Rhonda goes up on her own and leaves them to their demise. Sam is seen walking beside her as she leaves.

Laurie (Anna Paquin) and her friends are all werewolves and they lured boys to their party so they can kill them. This includes the masked man, who is revealed to be Principal Stephen (who donned a mask and fangs to kill women during the night – only for Laurie to turn the tables on him). Sam is sitting watching the mayhem as it unfolds.

Alone in his house, Mr. Kreeg is visited and tormented by Sam. Mr. Kreeg rips Sam’s mask off in the struggle revealing that he has the face of a pumpkin. Sam is about to kill Mr Kreeg with a sharpened lollipop, however Sam instead hits a candybar that fell on Mr. Kreeg’s chest.  Enticed by the treat, Sam begins eating the candybar and leaves. In the fireplace, there is a photograph burning revealing that Mr. Kreeg was the driver of the bus that crashed killing the mentally disturbed kids (the film previously shown the driver crawling out of the lake after the crash).

Later on Mr. Kreeg is all bandaged up and is giving out treats to kids. The various characters from the previous stories are seen along the road, while Sam watches. Sam sees Emma and Henry’s discussion across the road and goes after them (bringing the film full circle). Mr. Kreeg opens the door to see the reanimated corpses of the kids, and the film ends with one of them saying “Trick or Treat” 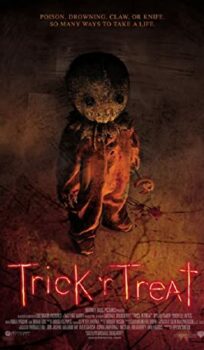