SHORT VERSION:
Harry enters Torok’s fairy world and finds his sister Wendy and releases her from a glass enclosure Torok has been keeping her in, but then the big mean ugly creature Eunice had warned him about – the heart of this world – emerges out of nowhere. Torok takes the magic spear Eunice had given Harry to use against the creature, and the fairy world starts trying to break out of the apartment building, drawing the attention of bystanders and the police. The creature throws Harry to the ground, but then it starts threatening Wendy, causing Torok to panic since he had planned for her to be princess of the fairies in his world. Left with no other choice, he spears the creature in its heart, saving Wendy but causing his world to come undone. Harry collects Wendy and escapes with her back to their family’s apartment, and the building returns to its original state.

As the Potters leave to file a report at the police station, a younger Eunice stops Harry and says that, for a human, he did pretty good in there. A cop then goes into the apartment to check things out, and he finds an entrance to a remnant of Torok’s fairy world in the basement, and he is pulled into it. Torok then appears with his hypnotizing ring on and shuts the door….

LONG VERSION:
One night, Harry (Noah Hathaway) sees Wendy (Jenny Beck) turn into the troll, so he visits Eunice (June Lockhart) the next morning and tells her about what he saw. She shows him a drawing of the very troll he had seen and explains that this particular troll is named Torok (Phil Fondacaro).

She goes on to further tell him a story about how, centuries ago, there were two equally divided kingdoms, one populated by humans and the other by fairies. Everything was peaceful until Torok – a wizard who was romantically involved with Eunice, who was a princess back then – and some rebel fairies decided to take over both kingdoms. A great war was waged that ultimately saw the humans emerge victorious, and the rebel fairies were condemned to darkness and Torok was transformed into a troll for all eternity. However, Torok’s thirst for world domination hasn’t dimmed with time, and he has come to the apartment building they live in and is going from apartment to apartment and transforming each of them into a lush fairy world and the tenants into fairy creatures, slowly turning the whole building into a single fairy universe. Once the transformation is complete, he and his fairy army will be able to invade this world, and Eunice explains that she is here to stop him from accomplishing this. She says that Wendy is still alive somewhere in the building, and she is being kept alive because, when Torok wipes out humanity, he will keep her around to become the princess of the fairies since she is a fair-haired maiden. His time is almost finished, and if he doesn’t take over Eunice’s and Harry’s apartments before the end of the Witch’s Sabbath, then his plans for invasion will not come to fruition. She then gives Harry a magic spear and tells him to plunge it into the heart of Torok’s universe, which will take the form of the biggest, meanest, ugliest creature there.

Harry is then sent off to stand guard in his apartment, and Eunice transforms into her younger self, takes her own spear, and hunts for Torok alone. She enters one of the transformed apartments, but she soon finds herself under attack from the big creature she told Harry about. She flees back to her apartment, evading some of Torok’s other fairy friends along the way, but Torok is there and he ends up turning her into a tree stump. Sensing that something has gone wrong, Harry heads back up to Eunice’s apartment, but enters to find it has become a fairy world and sees Eunice’s new state. She tells him that it is all up to him now and that he must find and save his sister.

Harry finds a sleeping Wendy encased in glass, but as he gets her out, the big creature emerges out of nowhere, and Torok snatches Harry’s spear. The fairy world then starts trying to bust out of the apartment building, drawing the attention of bystanders and the police. The creature stalks Harry and Wendy and ends up throwing Harry to the ground, but then it begins to threaten Wendy’s safety, going against Torok’s plans for her. Left with no other choice, Torok throws the spear into the creature’s heart and kills it, saving her but causing his fairy universe to unravel. Harry grabs Wendy and gets them both out of there and back into their apartment, where they happily hug their parents. They then look out into the hallway and discover that the building is back to its original state.

The Potters pack up their suitcases and leave for the police station to file a report, but on their way out, the young Eunice stops Harry and tells him that he did pretty good in there, for a human. After the police disperse the crowd, one of the cops goes into the basement to do a check, and he opens the laundry room door to find a section of Torok’s fairy universe still intact. He is pulled into it, and Torok then appears with his hypnotizing ring on and shuts the door….. 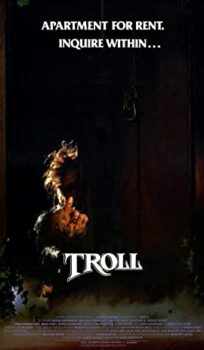