Tron (Bruce Boxleitner) and Yori (Cindy Morgan) make it to an I/O Tower, and there Tron is granted access to it by its guardian Dumont (Barnard Hughes). He communicates with his User Alan (also Bruce Boxleitner), where he gives Tron the necessary powers needed to destroy the Master Control Program (MCP) (voiced by David Warner). Tron & Yori then escape before Sark (David Warner) and his soldiers access the tower, but Dumont is captured. The two then access the Solar Sailer, fighting off some of Sark’s soldiers before they take off across the Game Sea for the Central Computer Mesa, where the MCP’s core is. Flynn (Jeff Bridges), disguised as one of Sark’s soldiers, clung onto the edge of the Sailer before it took off, and hangs there for a while before Tron finds him and brings him on the deck. Flynn soon lets it be known to Tron & Yori that he is indeed a User.

Sark’s ship eventually intercepts the Solar Sailer, destroying it, and Flynn & Yori are captured with Tron believed to be dead. Sark then puts them in a cell and disembarks, taking the former occupant Dumont with him, but not before telling them that the ship and everything on it will be de-rezzed. Sark, his soldiers, Dumont, and a few other captured programs board an escape shuttle and take off for the Central Computer Mesa, but they don’t notice that Tron, still alive, has stowed away on it. The shuttle lands on the Mesa near the MCP’s core. Flynn manages to keep Yori alive and the ship relatively intact just as it enters the Mesa.

Sark brings the captured programs to face the MCP, and after they are all bound to the wall in preparation for being merged into him, the MCP senses Tron’s presence and sends Sark out onto the Mesa to do battle with him. During the fight, Tron gets the upper hand on Sark, destroying his identity disk and severely damaging him. The MCP then transfers his functions to Sark, causing him to grow into a giant just as Tron begins to attack the MCP directly, attempting to break through the shield protecting its core. As Sark is trying to stop Tron, Flynn has Yori steer the remains of Sark’s ship towards the core, and he then jumps inside. This distracts the MCP long enough for Tron to throw his disk through a gap in the shield, destroying the MCP (as well as Sark) and freeing the system.

Flynn is re-materialized back in the ENCOM terminal that he was working in in the real world almost immediately after the MCP’s destruction, and a nearby printer begins printing the evidence that Dillinger (also David Warner) stole Flynn’s game programs. Dillinger arrives at his office the next morning to discover a message on his computer screen showing the evidence of his crimes. The last scene shows Alan and Lora (also Cindy Morgan) greeting and hugging Flynn, the new chief executive of ENCOM, at the helicopter pad on top of the ENCOM building. 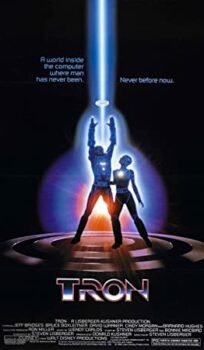