Saint Andrews wins their first Football game. However Steve’s (John Wayne) ex-wife, Anne, (Marie Windsor) calls up Father Burke (Charles Coburn) and reveals to him Steve’s freud in picking the players (which I’m being conveniently vague about here, since I know very little about Football, so the movie completely lost me on that point, but it was clearly something a tad bit shady). When Father Burke confronts him about it and fires him, Steve defends both his actions, and the players he chose.

Steve goes to confront Alice (Donna Reed) and ends up kissing her. Later at the court hearing, Alice retracts her report, and states that she does in fact think Steve is a better parent for Carole (Sherry Jackson) then Anne, however she is also forced to admit under oath, that she is in love with him, and her testimony is therefore considered biased. The judge decides to assign a new social worker onto the case, and in the meantime puts Carole into foster care.

The Cardinal (Lester Matthews) tells Father Burke that their order has changed it’s mind, and that Saint Andrews can remain open, even though they were unable to pay their debts. Father Burke, regretting the way he treated Steve, and that the lose of his job could lead to him losing Carole, announces his retirement, saying that he’s become to old, and was trying to save Saint Andrews for himself rather then for the right reasons.

Steve gets his job back at the college, and though the movie ends with Alice taking Carol away to the foster family, it’s implied that she and Steve will get married and Carol will be returned to him. 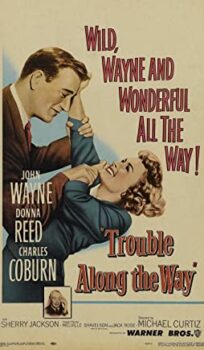