Gus (Clint Eastwood) is an aging scout for the Atlanta Braves and his eyesight is failing. With 3 months left on his contract and rumors that he might not be renewed, he sets out for North Carolina on what may be his last scouting trip to see whether a young slugger named Gentry is as good as everyone has heard.

Also taking a look at Gentry is the scout for the Red Sox, Johnny Flanagan (Justin Timberlake); Johnny had been recruited by Gus years earlier but blew his arm out playing too-much-too-soon for the Braves, although the men have remained on good terms. The Sox have a first round draft pick coming up and Johnny needs to decide if they will take Gentry or pass.

Gus’ daughter Mickey (Amy Adams) is a sharp lawyer on the rise in her firm. Once she learns of Gus’ vision problems, she goes with him to see Gentry, albeit while working on a big case that could land her a partnership. Gus clearly is not comfortable relying on her or anyone else, while she feels that he has pushed her away ever since her mother died when Mickey was only six years old.

Johnny falls for Mickey and she slowly reciprocates.

On their final day of observing the player, Gus is able to hear, rather than see, that Gentry hands “drift” when he swings the bat, meaning that he will have trouble hitting a curve ball. Gus tells Mickey, who is able to see it happening, and Gus strongly recommends to the Braves management that they not sign Gentry. Gus & Mickey explain their decision to Johnny, who gets the Red Sox to pass on him for their first round pick.

The Braves management then turns around and immediately signs Gentry, disregarding Gus entirely, having sent someone else to scout without Gus knowing; this guy knows nothing of the drift problem. Johnny is furious, thinking that both Gus and Mickey had deceived him intentionally and leaves angry. Mickey finds out that her firm has allowed another associate (who also wants to make partner) to work on her case while she has been gone and her partnership is on hold.

Gus (feeling betrayed by his bosses and useless) and Mickey (betrayed by her bosses and brokenhearted) finally discuss why she felt abandoned by Gus and why he pushed her away; he had fought a molester off her at a baseball game when she was very young, and he wanted a better life for her, not realizing that being with him was the only life she ever wanted. Gus leaves Mickey alone at the motel and takes a bus home.

As Mickey is leaving to head home the next morning, she sees the motel owner’s 17-year-old throwing a baseball like Sandy Koufax. She tests him a bit and realizes the kid, Rigo, is a tremendous natural pitcher; he just hasn’t played for his school since his mother is strict about his grades. No one has scouted him.

Mickey shows up with Rigo at the Braves training camp and pulls strings to get him on the field long enough to pitch his fastball and curve to Gentry, who is unable to hit either one. The Braves management realizes that Gus was right about Gentry’s drift problem and now want to sign Rigo; Gus volunteers Mickey to act as his agent. The Braves fire the guy who insisted Gentry was a brilliant choice. Gus is offered a new contract and he offers to think about it, knowing they were jerks for going behind his back by sending the 2nd scout. Mickey’s co-worker did poorly on the big case so her partnership is now being fast-tracked; she says she’ll think about it, knowing the higher-ups are jerks for going behind her back by handing her case over to the ambitious co-worker. Then she throws the company cell phone in a dumpster.

Johnny shows up to reconcile with Mickey and she accepts. Gus smiles at their reunion & takes another bus home. 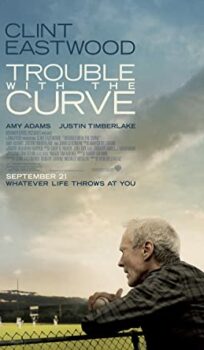