After killing Hector (Eric Bana), Achilles (Brad Pitt) vows not to attack the city of Troy for twelve days out of respect for the fallen Hector. After twelve days, the Spartans seem to have departed and left a giant wooden horse as a gift to Poseidon, god of the sea, to grant the Spartans a safe trip home. The citizens of Troy rejoice, happy that the war has ended, but the Spartans are hiding in the horse. They break out and take over Troy. During the battle, Priam (Peter O’Toole) is killed by Agamemnon (Brian Cox), who in turn is killed by Briseis (Rose Byrne). Paris (Orlando Bloom) kills Achilles and escapes with Helen (Diane Kruger).
Thanks, Stranger, and a special thanks to Rosa L, who sent in a longer version that we weren’t able to use. 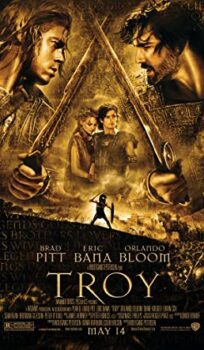