Mattie (Hailee Steinfeld), La Beouf (Matt Damon) and Cogburn (Jeff Bridges) find Tom Chaney (Josh Brolin) amongst the Ned Pepper Gang. Mattie shoots Chaney with a pistol but only wounds him, allowing her to be captured by the Gang. The Gang leaves Chaney to watch after Mattie in order to confront Cogburn. Chaney attempts to kill Mattie but is knocked unconscious by La Beouf with his rifle. Cogburn kills most of the Ned Pepper Gang but is wounded and his horse is killed. As Ned Pepper himself is about to kill Cogburn, La Beouf kills Pepper from 400 yards with a sniper rifle.

Distracted, La Beouf is knocked out by Chaney with a rock who then goes after Mattie once more. Mattie gets a hold of a rifle and kills Chaney by shooting him in the chest off the side of a ledge. However, the kickback sends Mattie falling into a pit, where she is bitten by a venomous snake. Cogburn saves Mattie and takes Matties prized horse to get her to a doctor in time. Cogburn rides for days and nights, eventually crippling Mattie’s prize horse, which Cogburn mercy kills. Cogburn takes Mattie by foot and finally gets her to a doctor.

25 years later, Mattie, who lost most of her left arm to the snake bite, goes to visit Cogburn at a traveling Wild West Show. When she arrives, she’s informed that Cogburn had died 3 days earlier. Mattie has Cogburn re-interred to her family cemetery.  Mattie announces that she hasn’t met La Beouf since, and the film ends with Mattie visiting Cogburn’s grave.

Thanks Kenneth
(and Steve) 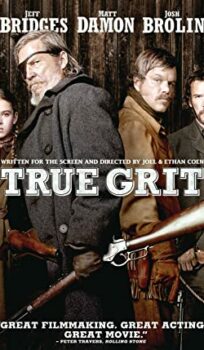