A group of friends on vacation in Mexico encounter a stranger named Carter (Landon Liboiron) who tricks them into going into an abandoned mission to play Truth or Dare. This starts a curse in which all those that played are now bound to the game, and their failure to play the game results in their deaths.

Olivia and her friends learn that the curse started at the mission when a former nun summoned a demon, Calax, after suffering abuse at the hands of a priest. The curse can be broken if the one who unleashed the demon recites an incantation and makes a sacrifice.

Olivia, Lucas, and Markie (Lucy Hale, Tyler Posey and Violett Beane) find Carter (real name Sam) and force him to go through with the ritual to stop the curse, but Calax catches Lucas on his turn, and when he is forced to choose between killing Olivia or Markie, he refuses, and Calax kills him and Sam.

With no other way to end the game, Olivia posts a video seen by people all over the world to explain the game and now forcing everyone to play, effectively dooming the world. 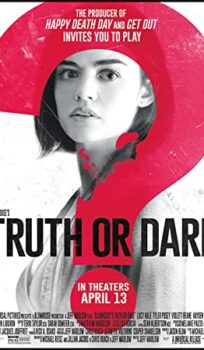