Frustrated by his inability to get help for his injured fireman brother Terry (Robert Urich), young Jimmy Lynch (Tim Hutton) uses graffiti and electronic media to put the phrase “TURK 182” all over New York City (“Turk” was Terry’s nickname, and 182 was the number on Terry’s fire helmet). Mayor Tyler (Robert Culp) is furious, and tells Detective Ryan (Peter Boyle) to do whatever it takes to stop “Turk.”

At a big event celebrating the 75th anniversary of the Queensborough Bridge, Jimmy plans to put “Turk 182” in lights on the bridge, knowing the mayor and thousands of spectators will see the message. Everyone sees Jimmy climbing the bridge, rearranging the lights. A TV reporter who had interviewed Jimmy earlier digs out the footage, and plays the interview on the air. The entire city hears how fireman Terry was injured while saving a life, and how the city refused to give him a pension or pay for his medical treatment.

Detective Ryan tries to shoot and kill Terry before he can complete the message, but he is stopped by Terry, Danny (Kim Cattrall) and Detective Kowalski (Darren McGavin). Jimmy gets to finish his work, and the entire bridge is covered in lights saying “Turk 182.”

The crowd cheers wildly for Jimmy, and the mayor tells an aide that, as soon as Jimmy comes down, they’ll pretend they were on his side all along. 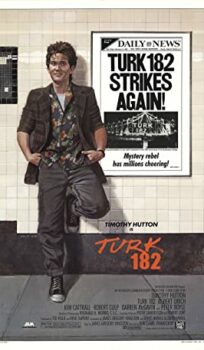