Alma is finally accepted by her mother and schoolmates and begins a relationship with Artur after he finally confesses publicly that he did poke her with his privates.

Alma (Helene Begsholm) is a very horny teenager who lives in a small town in Norway. Her mother (Henriette Steenstrup) becomes increasingly concerned about Alma’s sexual nature after she gets a phone bill with numerous calls Alma’s made to a phone sex hotline on it. There is very little hope for a future in their town, and the teens regularly give a middle finger to the town’s sign whenever they pass it. Alma spends her time either hanging out with her best friend Sara (Malin Bjørhovde) and Sara’s sister Ingrid at a ramshackle bus stop or fantasizing about having sex with her longtime crush Artur (Matias Myren). Sara hopes to move to Texas to be an advocate for death row inmates and worries that any romantic relationships will cause her to remain forever stuck in their town. Although Sara writes letters to death row inmates, she never sends them.

At a party, Artur approaches Alma outside. When she isn’t looking, he takes out his penis and pokes her with it. Unsure how to react, Alma runs inside and fantasizes about having sex. She then confides what happens to a fellow party-goer who confronts Artur. He refuses to confirm Alma’s claims and her peers soon declare that she is a liar. They give her the nickname “dick Alma” and isolate her at school. Ingrid even forces Sara not to talk with Alma in public out of fear that they too would be ostracized. Despite her humiliation, Alma cannot stop fantasizing about sex (with many people). Her mother also becomes increasingly upset about her daughter’s sexual nature.

Alma gets drunk and confronts Artur, saying that they are meant to be together and that he should stand up for her. He refuses to admit what he did and, further, claims to have a girlfriend. Being fed up with being ostracized by her schoolmates, rejected by Artur, and misunderstood by her mother, Alma runs away to Oslo. There, she stays with Sara’s eldest sister, who is a college. The sister and her roommates are far more enlightened about sexual topics. Their support of Alma and dismissiveness towards her peers gives Alma self-confidence and makes her realize that she has nothing to be ashamed about.

Meanwhile, Sara finally stands up to Ingrid and says she is going to publicly hang out with Alma again. She also mails the letters she wrote and decides to enter a relationship with a schoolmate that has a crush on her. Alma’s mother finally learns of the bullying that Alma has been facing because of Artur and realizes she treated her daughter unfairly. When Alma returns home, her mother embraces her and welcomes her.

To Alma’s surprise, Artur visits her and apologizes for what he did. He says he lied about having a girlfriend and does want to be with Alma. She rejects him, telling Artur she won’t date him because he is a coward.

The next day, Alma arrives to school to find Artur standing under a banner he made confessing that he did poke her with his penis. Now that Artur has admitted what he did, Alma is willing to date him. The film ends with the happy couple eating dinner with Alma’s mother (who herself is now dating her boss). Alma asks if Artur can spend the night, and the mother responds with a quick no (even though the mom accepts Alma, a boyfriend spending the night is still too much). 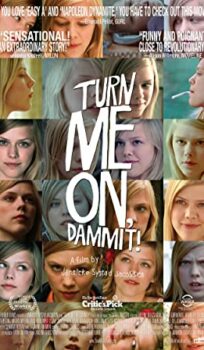