After successfully (and gruesomely) being transformed into a walrus by the nefarious Howard Howe (Michael Parks), shock jock Wallace (Justin Long) has to fight him to the death in his new form. He prevails, stabbing Howe in the trachea with his makeshift tusks and killing him.

Wallace’s girlfriend Ally (Genesis Rodriguez) and best friend Teddy (Haley Joel Osment) along with kooky French Canadian detective Guy Lapointe, come to rescue him. They find Howard Howe dead and Wallace alive, but in a “full walrus” mental state. He has passed the point of no return.

One year later, Ally and Teddy come to visit Wallace, who now lives in a zoo enclosure. They bring him a mackerel treat and offer him reassurance. Ally says she loves Wallace, but since she’s human and he’s not, she leaves with Teddy. As for the second “Mr. Tusk?” He remains, weeping in the final shot. 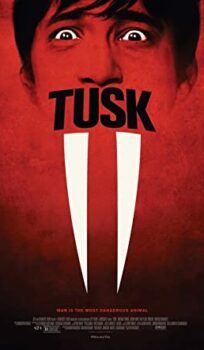