Edward (Robert Pattinson) is too late to save Bella (Kristen Stewart) from killer vampire James who hurts her and manages to bite her and provoke the transformation. Edward’s family arrive in time stop him from going into a killing frenzy and dispose of James themselves, while Edward struggles to cure Bella without killing her.  Bella wakes up at the hospital, with everybody thinking she had an accident because of her legendary clumsiness.

Bella convinces her mother to let her stay with her dad, and near Edward. She convinces Edward no to leave despite his desire to save her from his kind, but he refuses to turn her into a vampire as he despises his own monstrous condition. They end up going to the prom together, where Jacob Black gives Bella a message from his father, saying that she should leave Edward and he’ll be watching them. The movie ends with Bella and Edward in a romantic dance, as James’ girlfriend Victoria watches them with tears and an evil smile. 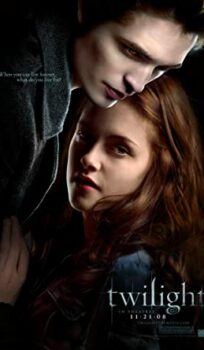