SHORT VERSION:
Stromm eventually has his goons go over to Frank’s mansion and kidnap Brad and Steve, and during this, the butler Thomas reveals to the boys that he is in league with Stromm. Stromm calls Frank and lets him know that he has his nephews, and orders him to meet him at his freighter at midnight tonight if he wants to see them alive again. Frank then phones Peter and David and tells them of the pending meeting, but he won’t say where he’s going and tells them to not get the police involved. The Falcones quickly realize that they are all being set up and wonder what they can do to save them, and then they soon come to suspect that Thomas might know something about where the boys are. After they confront and expose him as Stromm’s spy, they lightly torture him until he reveals where the boys are being held.

With help from two more sets of identical twin brothers they call in, the Tigers and the Aleems, Peter and David subdue the henchmen on the freighter and save the boys. However, Stromm appears and reveals he has captured the boys’ tutor (and Peter and David’s love interest) Judy to use as a hostage. Frank then shows up, but when Stromm tries to shoot Frank, the federal agent Bennett snipes Stromm in the heart and kills him. The good guys then jump off the ship before a bomb Stromm had set to blow at midnight explodes and destroys most of it.

Peter and David open up their own Italian restaurant using the money Thomas received from Stromm for his spy work, and they both go steady with Judy.

LONG VERSION:
Over time, Peter and David (Peter & David Paul) and Brad and Steve (Christian & Joseph Cousins) bond with each other and become friends, and the Falcones both fall for the boys’ homeschool teacher Judy (Rena Sofer), who returns their affections. One day, though, a bunch of hooded goons working for Stromm (George Lazenby) break into the mansion aiming to kidnap the kids. Both the Falcones and the kids do all they can to get the better of the villains, but Brad and Steve are captured and taken away in a helicopter. Amidst the commotion, the butler Thomas (Barry Dennen) receives a briefcase full of cash from the goons for being a good spy for Stromm and also shows his true colors to the boys, and one of the goons ties him up to make it look like he is an innocent victim. Stromm then calls the boys’ uncle Frank (Jared Martin) and orders him to come to his freighter in Long Beach Harbor at midnight that night if he wanted to see his nephews alive again.

Frank telephones the Falcones while they are watching a home movie that Judy shot of them playing with the boys and fills them in on how he is going to meet Stromm that night, but he won’t tell them where he is going and he orders them to not get the police involved. The brothers fully believe that Frank and the boys are being set up to be killed and wish that they knew where the kids were, but then they notice Thomas in the background of the movie watching them with a scowl on his face and begin to suspect that he might know something. They confront him as he is leaving the house, and he informs them that he is seeking employment elsewhere after what just transpired. As Peter tries to help him with his cash-loaded briefcase, it breaks open and spills the contents, exposing him as Stromm’s spy. They subject him to light torture to find out where they boys are being held, and he eventually cracks and confesses that the boys are being held on the aforementioned freighter and Frank will be going there tonight. They drive down to the harbor, and after checking the freighter out from afar and seeing the sizeable number of armed guards on patrol there, they decide to call in two more sets of identical twin brothers, the Tigers (Simon & James Kim) and the Aleems (Taharqa & Tunde-Ra Aleem), to assist them.

The trio of twins sneak onto the freighter after nightfall, and together they get the better of all of the henchmen and the Falcones rescue the boys. After all of the twin brothers meet up on deck, Stromm appears, and the Falcones tell him that he has lost. Stromm then brings out a bound and gagged Judy, having kidnapped her so he could use her as a hostage to get off the ship in the event that things went south. Frank then shows up to stop him from leaving, but when he tries to shoot at Frank, Judy hits him and gets out of his grasp. Stromm takes aim again, but the federal agent Bennett (David Wells) snipes Stromm in the heart from a high perch, and he collapses to the ground dead. The Falcones free Judy, and she yells that Stromm had planted a bomb on the ship that was going to explode at midnight. David checks his watch and sees that midnight is just seconds away, so everybody quickly jumps into the water just as the bomb explodes and destroys most of the ship.

The next scene shows that the Falcones have opened their own Italian restaurant, and all of their friends, their parents, Judy, Bennett, Frank, and Brad and Steve are dining there. Judy has gone steady with both of the Falcones, and Frank is now penniless, but feels great because he still has his nephews. Frank then queries the Falcones on how they got the money to open this joint, since the government froze all of his assets and therefore made useless the check that he paid them for their services, and they reply that Thomas had “given them a loan,” meaning that they had accomplished their dream by taking his payoff money. 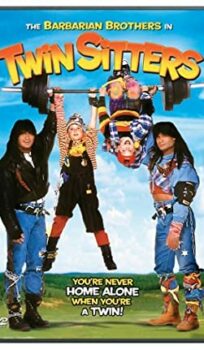