After a weekend of very mixed results trying to convince her co-workers to vote in favour of her keeping her job -where those who wouldn’t give up the bonus manifest their reasons for it, in varied ways that went from sympathy to sheer contempt-, Sandra (Marion Cotillard) returns to work on Monday morning, where the secret voting is to take place. She even gets to confront Jean-Marc (Olivier Gourmet) about basically bullying everyone into accepting the bonus so the company could let Sandra go, but he denies it.

The result is still divisive: eight for her, eight against her, which can’t do anything against Friday’s original decision. Sandra tearfully thanks those who had sided with her, welcomes Anne (Christelle Cornil) to stay with them once more -away from her abusive husband- and goes to clear her locker, as it seems she is out of a job. Nonetheless, M. Dumont (Batiste Sornin) calls her to his office, to inform her that the Company made the decision of both keeping her onboard and giving everyone else the promised bonus, but at a price: Alphonse’s (Serge Koto) contract would not be renewed -he had voted in favour of Sandra, despite fearing that, if Jean-Marc found out, would retaliate against him due to his contract being only conditional until next September.

As a result, Sandra turns down the offer and walks away; however, this time around, she feels invigorated, proud of herself and happy that, as she tells her husband Manu (Fabrizio Rongione) on her way out, “they put up a good fight”. 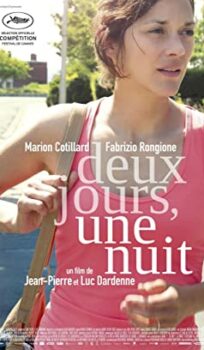