During war time in 16th century Japan, two brothers seek their fortunes. Genjuro is a potter who wants to make money by selling pottery at war time prices. Tobei dreams of becoming a Samurai. Leaving their wives behind they set out to realize their dream. Genjuro makes a lot of money selling pottery. Tobei achieves recognition by dishonestly claiming credit for killing a war lord. Tobei enjoys being a Samurai, until he encounters his wife who has become a prostitute after being raped by soldiers in his absence. Meanwhile, Genjuro is seduced by the beautiful Lady Wakasa who can give him everything he has dreamed of. He later learns that she is a ghost and he barely escapes with his life. He finally makes it home and is reunited with his wife for one happy night.

The next day he awakes alone and learns that what he saw was a ghost as she had died some time before. Fortunately, Genjuro’s small son survived and that gives him reason to go on. As to Tobei, he is reunited with his wife and has learned his lesson. The film ends with the two brothers back to where they were before, no richer but much wiser. 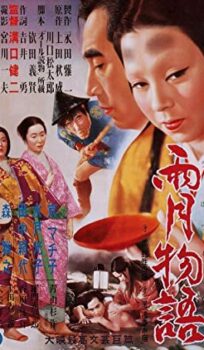