SHORT VERSION:
Spencer finds a princess doll for Katherine in the unclaimed baggage warehouse, and he, Grace, Charlie, and Donna manage to get down to the lodge and get it to her as she sleeps so she won’t lose her faith in Santa. Porter then captures them and brings them back to the airport, and though he locks them in separate rooms, they manage to get out, and together they find the room where Porter stashed all of the Christmas decorations (his wife left him five Christmases ago, so the decorations serve as a reminder of that unhappy moment). Beef then returns from his journey with a Christmas tree, and they all begin setting up a holiday display. Spencer also gives the defeated Porter a Christmas gift, which turns his sour attitude around.

Since her parents are out of town, Spencer invites Grace to come spend Christmas with him and his family. Donna gives Charlie her number and kisses him before they part ways, and Beef starts telling a little girl all about how he got the Christmas tree as he waits for his flight.

LONG VERSION:
As Spencer (Dyllan Christopher), Grace (Gina Mantegna), Charlie (Tyler James Williams), and Donna (Quinn Shephard) are rummaging through the unclaimed baggage warehouse – with one of their finds being walkie-talkies with video recorders – Spencer finds a princess doll, which he decides to give to Katherine (Dominique Saldaña) as a “gift from Santa” so she won’t lose faith in him.

Porter (Lewis Black) and the other security guards eventually find out that they’re down there and confront them, but the kids evade them and escape out the back door. They see the Hoover International Lodge just down the hill, so they take a canoe and prepare to sled down to it. Van Bourke (Wilmer Valderrama) then appears, leaving the kids no choice but to push him into the canoe and bring him along with them. Porter and the guards soon come following behind with their own makeshift sleds, but only the kids, Van Bourke, and Porter make it to the lodge safely.

The kids leave Van Bourke in the canoe and start looking for Katherine, with Porter in pursuit. They eventually find Katherine asleep near the hotel’s fireplace, and Spencer places the doll next to her. Porter then shows up, as does Van Bourke, and he tells Porter to just let the kids stay at the lodge. Porter shoots down his opinion, saying that he doesn’t care what he thinks, and Van Bourke responds by telling him he’s quitting as soon as these kids are back on their planes.

Porter brings the kids back to the airport and has them each locked up in separate rooms, and he tells Spencer that, if they find a way out of this, he’ll admit defeat. Through Spencer’s ingenuity, they escape by first using the video recorders on their walkie-talkies to take videos of themselves pacing, and then they quickly deactivate the security cameras, put the videos on a loop, stick the video screens onto the lenses, and reactivate the cameras in order to fool Porter into thinking that they are still in the rooms, and then they sneak out via the air ducts. As they crawl around in them, Charlie accidentally falls into the room where Porter stashed all of the Christmas decorations. By this point, the batteries in the walkie-talkies have run low, ending their dupery of Porter, and he finally accepts that they got the better of him. After the kids exit the room, Beef (Brett Kelly) returns from his journey with a huge Christmas tree (which he traded his beloved Aquaman figure for), and another light bulb goes off in Spencer’s head. He has Donna go to Van Bourke and tell him to make lists of all the kids traveling with families and all of the passengers traveling alone and to call the lodge and tell them to bring the U.M.s back to the airport at 7 a.m., and then the kids set about creating a holiday display and bringing up stuff from the unclaimed baggage warehouse to give away to the people on the lists.

Porter confronts Spencer alone and admits defeat to him as promised, and as they converse, he reveals that he didn’t put any of the Christmas decorations out because his wife had left him five Christmases ago, so they serve as a reminder of that unhappy moment. They make peace, and Spencer then hands Porter a present and apologizes on behalf of the others for wrecking his vacation. Spencer leaves, and Porter unwraps the gift to find it is a Hawaiian snow globe, and he smiles.

The next morning, the kids wake the passengers and direct them all to the holiday display. Then, Katherine and the other young U.M.s appear and see the display, and Porter shows up dressed as Santa and starts giving out the unclaimed items to the people on the lists. Sam (Rob Corddry) then appears to pick up Spencer and Katherine, and Porter tells the quintet that, due to their hard work, they will be flying to their homes first thing this morning.

Since she earlier admitted that her parents were out of town, Grace is invited by Spencer to come spend Christmas with him and his family, and she accepts. Donna gives Charlie her phone number and kisses him before they part ways, and as Beef waits for his flight, he tells a little girl he meets all about his journey to get the Christmas tree. 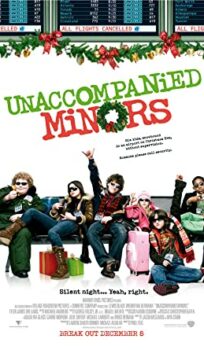