Submitted by Andy I

Munny’s (Clint Eastwood’s) friend wimps out and leaves the group before Munny and the Kid track down and kill the last of the whore-beaters. The whore who delivers their reward lets slip that Little Bill and his men found him, killed him, and are displaying his corpse in town as a warning to other bounty hunters.

Upon hearing this, the “Old Munny” finally reasserts itself, takes a belt of whisky, then rides into town for revenge. He finds the entire posse celebrating in the saloon. He shoots the proprietor of the saloon/whorehouse in cold blood, then kills a half a dozen more in the resulting shootout, including Little Bill who requires an extra bullet. He allows the survivors to file out alive while he reloads. The Reporter remains and gets a brief interview before sensing that it’s time for him to retreat.

Munny has intimidated the town so thoroughly that no one has the guts to confront him and he quietly rides out of town.

An epilogue before the end credits claims that Munny then moved to San Francisco, taking his children with him, and prospered in dry goods. 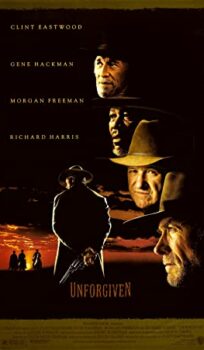