Career transition counsellor Ryan Bingham (George Clooney) begins to doubt his philosophy of living with no commitments in life.  He abandons the seminar he is speaking at and travels to Chicago to pursue a formal relationship with Alex (Vera Farmiga), the woman he had been having various encounters with on his travels. However, he finds out that she is married with kids and that she considered their relationship as only an escape from her real life.

On his flight back home, Ryan finally reaches his goal of ten million frequent flyer miles, however the feeling wasn’t as good as he expected.  He proceeds to transfer some of his miles to his sister and new husband (since they were unable to afford a honeymoon).

When he returns to work, he finds out that Natalie (Anna Kendrick) quit the company after a woman she fired (during her training trip with Ryan) committed suicide after she and Ryan ignored the warning signs. She quickly gets a new job after Ryan writes a letter of recommendation praising her talents.

Ryan’s boss (Jason Bateman) puts pause on the plan to replace personal firings with video conferences and sends Ryan back on the road.  The film ends with Ryan standing in the airport staring at the destination sign. 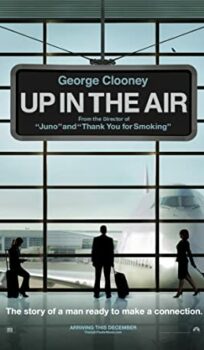