POOPER:
Kris (Amy Seimetz) and Jeff (Shane Carruth) discover that they were drugged/manipulated into ruining their own lives with this strange blue drug.  They send copies of the books to all the people in the Sampler’s files so they can remember too.  Kris connects to the Sampler as he’s “watching” Jeff — and the Sampler doesn’t realize she’s physically with his body, not with Jeff — and she shoots him.  Then Kris, Jeff and the others reclaim the pig farm and the film closes with Kris happy and cuddling a piglet.

SPOILER:
The movie opens with a guy harvesting blue stuff from worms in the bottom of plants.  His son/nephew some younger relation, feeds his friends soda poured over the top of the worms and it allows him to make them mimic his movements.

Next we meet Kris who works in TV in some capacity.  She’s busy and together and, as she’s as a bar waiting for a friend, the Harvester uses a taser her, pulls her out into the alley and forces one of the works down her throat.  The drug harvester guy has her do repetitive tasks (copying down pages from Walden and making paper rings) while manipulating her into emptying her bank accounts and giving him all her valuables.  He also tells her that his head is made from the sun so she won’t remember his face.  She doesn’t remember doing any of this when he leaves and releases her; since he’s not allowed her to eat the whole time, she sits in front of the fridge stuffing her face.  Once released she/the audience realize the worm he forced into her is very large and moving around under her skin.  She tries to cut it out cutting herself all over her body.

Meanwhile, there’s a man who samples sounds outside and manipulates them into music (the Sampler).  We see him doing this and then one night he’s sitting near a trailer/truck with the sounds playing loudly.  This draws Kris to him.  She tells him, “I can’t get it out,” and then he performs surgery on her to remove the worm – he does this by sedating a pig, then cutting open its side, and drawing the worm out of Kris and into the pig.

She returns home and can’t remember any of it.  She tries to tell work she was sick with the flu but they don’t believe her.  She tries to buy groceries but can’t and when she goes to the bank they show her footage of herself withdrawing all her money so they don’t help her.

Intermixed with this we see the Sampler taking care of the pigs.  He feeds them and observes the people — he listens to the sampling music on headphones in proximity to the pigs and, via the worms, can then watch the people who were infected by the worms in their “real” lives.

Kris then gets a job in a copy/sign shop and takes the train.  She meets Jeff on the train and they’re awkward with each other but drawn to each other.  Jeff confesses to her that his wife left him because he was a drug addict found hold up in a hotel.  He’s paid by his boss off the books because he’s risky on paper; similar to Kris.  When they finally get together, as they’re sleeping, we see them in the sheets of the bed lying in the middle of the pig farm; once they wake up they’re back in the house in the bed — implying that Jeff has a pig too.  Mixed in with this both Kris and Jeff do repetitive tasks and get fascinated with noises like machine sounds; Jeff folds straw papers together into looks and Kris picks up rocks off the bottom of a pool and sets them on the edge of the pool while quoting poetry/a book of some kind.

Their pigs get together on the farm — hanging out together, eating together, etc. — which puzzles the Sampler.  Kris’s pig gets pregnant and he asks a neighbor what to do with the piglets; meanwhile, Kris has the feeling that she’s pregnant.  She goes to the doctor and is informed that she had surgery of some kind and it appears to have been to remove endometrial  cancer which means she can’t get pregnant.

The Sampler, once the piglets are born, violently separates the pig family — forcing Jeff’s pig behind a gate which he fights to get through, as well as pulling away Kris’s pig.  He puts the piglets in a bag, takes them to a river and throws them in.  Meanwhile, Jeff tosses papers down a balcony and attacks a random passerby.  Kris is extremely agitated as well saying that she can’t find “them” over and over and calls Jeff panicked from his building.  He picks her up and they go to their house and huddle together, frightened, in the bathtub.

We then see the piglets decompose underwater near the root of a big tree.  It has white orchids growing on it and as they decompose they release blue stuff that seeps into the tree.  The orchids turn blue and Kris can “feel” the plants/the river/the area where the piglets died/decomposed.  Two women harvest them and deliver them to the harvester from the beginning of the movie.

Jeff finds her picking up rocks off the bottom of the pool and quoting something each time she comes up for air/to set a rock on the edge of the pool; they figure out that it’s Walden by Henry David Thoreau.  Kris goes and purchases the book.  Then Jeff and she intentionally start the ritual — throwing rocks to the bottom of the pool and he and she read from the book until Kris feels the flowers/reconnects with all the other blue stuff connections; the pigs and the Sampler.  They also find music — I think from the Sampler, on Quinoa Records — that allows them to connect with the Sampler.

Kris connects to the Sampler as he’s “watching” Jeff — and the Sampler doesn’t realize she’s physically with his body, not with Jeff — and she shoots him.  She collects the files he’s kept on the people he’s removed worms from; she and Jeff send each person a copy of Walden so they can remember too.  Somewhere in there we see the women return to the tree where they got the blue orchids but the orchids there are white again and the harvester is seen being unable to harvest and more of the blue stuff from the plants/worms.  Lastly, Kris, Jeff, and the others claim the farm, taking care of the pigs themselves, and the movie ends with Kris looking happy cuddling and playing with one of her pig’s piglets and then the credits roll. 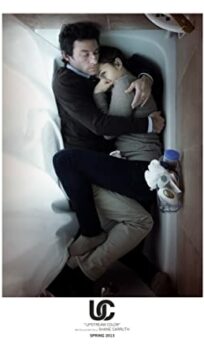