After defeating their four and their friends four doppelgangers, the family reunites and drives away.

All is good, and everyone looks relieved… until a quick flashback shows that when “Red” met Adelaide in the funhouse all those years ago, she knocked her out, took her Thriller T-Shirt, and went off into the real world. The “Adelaide” (Lupita Nyong’o) we’ve been watching for the whole movie is actually the doppelganger, and “Red” was simply the real Adelaide getting her revenge (this also explains why “Red” is the only one of the doubles to have concrete speech while all the other doppelgangers in the film have animalistic sounds).

Jason appears to realize the truth, and puts his mask on uneasily. 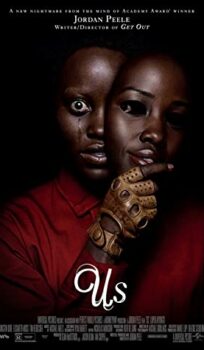