This is an anthology film.

Holy Hell (Wrap Around story):
A small SWAT team conducts a raid at a warehouse. Inside, they find dead people with bloody or popped-out eyes, scary imagery, and TVs playing VHS tapes (playing the stories below). Eventually, a corrupt SWAT team member (who was supplying the terrorists in the Terror segment) loses contact with his comrades and is hypnotized and tied up by two women dressed as SWAT team members. The women tell their captive that they belong to a cult controlling the warehouse and that their mission is to create these cursed VHS tapes playing on the TVs. They then record themselves killing their captive, saying this was their best video yet.

Storm Drain:
Local news reporter Holly (Anna Hopkins) and her cameraman Jeff (Christian Potenza) are covering a story about sightings of a rat man living in the sewers. The pair eventually enter the sewers after they find people living therein. Holly hopes their reporting on these lost souls living in the sewers will be a big story. They are taken captive by the people living therein and brought before a religious leader. The cult prays to a giant rat-like creature called “Raatma” (the rat man that the pair earlier reported on) that they believe will cleanse the wicked. If they survive Raatma, they are deemed pure. The creature spews bile on the pair, which kills Jeff (by melting his head) but has no seeming effect on Holly. We jump ahead to find Holly has since been rescued from the sewers and is back as an anchor on the news. On live air, she vomits bile on her co-anchor (melting his face off) before looking at the camera and saying, “Hail Raatma.”

The Empty Wake:
Hayley (Kyal Legend) is a new employee hosting her first wake, which the clients have asked to be recorded. The deceased is a man who committed suicide by jumping off the roof of a church. A huge storm breaks out, preventing anyone but one creepy old man from attending the wake. As the night progresses, Hayley becomes convinced that the corpse inside the coffin is alive. Her fears are realized as the now-zombified corpse breaks out of the coffin (although due to how it died, the corpse’s top half of his head is separated from the rest of it ). It attacks Hayley just as a tornado rips up the funeral home and blows the corpse away. A possibly zombified Hayley is then seen stumbling from the ruins and out into the world.

The Subject:
A mad scientist (Budi Ross) abducts various people and engages in experiments to fuse them with machinery, turning them into cyborgs. On the night he succeeds, a special forces police unit bursts in and kills the scientist. This triggers a failsafe where a particularly murderous cyborg is activated. The police that survive the murderous cyborg’s initial attack flee into the lab and begin killing all the other experiments. A female cyborg tries to escape the policemen’s rampage, eventually finding an exit alongside an officer who views the cyborgs as victims in need of rescue. Before the pair can escape, they are attacked by both the murderous cyborg and the crazed police captain. Almost everyone is killed in the ensuing skirmish. However, the heavily wounded female cyborg survives, and she exits the laboratory out to the world.

Terror:
A religious-based domestic terrorist group plans an attack on federal government buildings, hoping to take down the government (which they view as corrupt and godless). One of their supporters (who is also the corrupt member of the SWAT team in Holy Hell) supplies them with heavy artillery to facilitate their mission. However, the group plans to rely primarily on a secret weapon. They’ve captured a vampiric creature and are harvesting its blood. When the vampire’s blood is exposed to sunlight, it ignites in a huge explosion. With the vampire’s blood, the group can easily blow up government buildings. The night before their scheduled attack, the group has a party and most of the members get drunk. By morning, they realize the vampire has escaped its confinement and killed its guards. The group tries to hunt down and kill the vampire, but are no match for it. The vampire bloodily slaughters all the the members of the terrorist group.

There is also a fake commercial for something called the “veggie masher,” which parodies old infomercials. 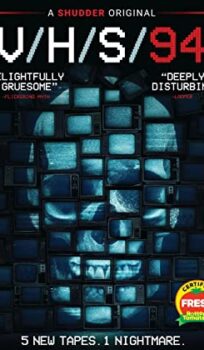