SHORT VERSION:
During the halftime period of the district championship game between the Coyotes and the Gilroy High Mustangs, Coach Kilmer tries to convince Mox’s teammate Wendell – who has sustained a torn knee ligament – to take a strong painkiller to deaden his pain so he can keep playing, not caring about possibly making his injury worse. Mox and his other teammates Lance and Billy Bob intervene and advise Wendell against it, and Mox also takes the opportunity to rebuke Kilmer over how he cares nothing for his players, only for winning games and titles. He soon tells Kilmer that they aren’t taking the field again with him coaching, and realizing that this will result in the Coyotes having to forfeit the game, Kilmer loses control and attacks him. The team quickly pulls Kilmer off him, and despite knowing that he has now just lost all credibility in their eyes, Kilmer tries to get them to follow him back out to the field. No one does, and the team ends up returning to the gridiron with Lance coaching them while he goes into his office and starts packing up his stuff, having decided to quit.

The Coyotes beat the Mustangs and win the district title, and Mox narrates that, though that was the last football game he ever played, he would never forget that day because it was all theirs. He also narrates the fates of a few of his teammates, and says that he took the academic scholarship he earlier received to Brown University. Kilmer never coached again, but his statue remains on West Canaan High’s field (though that is only because it’s too heavy to move).

LONG VERSION:
The night before their next-to-last game of the season with the West Canaan High Coyotes, Mox (James Van Der Beek) organizes an all-night drinking party with Billy Bob (Ron Lester), Wendell (Eliel Swinton), Tweeter (Scott Caan), and the injured Lance (Paul Walker). The first four guys play the game while still hung over, and this contributes greatly to the Coyotes getting defeated and losing their chance at scoring a perfect season. In the locker room afterwards, Coach Kilmer (Jon Voight) reams out Mox over both the party and how he regularly ignores his instructions, and then he tongue lashes Billy Bob again for not guarding Lance in their fourth-to-last game and allowing him to get injured (though that was really all Kilmer’s fault; he made Billy Bob play despite him still reeling from a concussion he suffered in the game before that, which caused him to pass out and fail to keep Lance safe, plus Kilmer had been making Lance play hurt for a long time) while also blaming the loss of his perfect season tonight on him as well. He then harshly ejects Billy Bob from the locker room.

After Mox gets home later on, his football-obsessed father criticizes him for holding the party and for his poor performance at the game, and tries to hammer into his head his belief of how playing football for the Coyotes is the opportunity of a lifetime. Mox angrily replies that, while such an activity may have been the opportunity of his lifetime, he doesn’t want his life. His little brother Kyle (Joe Pichler) then comes into the house with Billy Bob’s pet pig Bacon, and he says Billy Bob had just dropped him off and told him that Mox would know how to take care of him. Sensing that Billy Bob plans to do something terrible to himself, Mox goes out to find him. He locates him just outside the peewee football field they played on as kids, drinking booze and destroying his peewee football trophies with a shotgun. After talking to him, Billy Bob confirms that he wants to kill himself over all of the issues he has been having with football, specifically the stuff concerning Lance, believing that he really is to blame for what happened to him. Mox assures him that Kilmer is the true guilty party in that, and both he and the team need him. Billy Bob surrenders the shotgun to him, and then he uses it to blast a nearby poster of Kilmer.

The day before the Coyotes play their final game against the Gilroy High Mustangs for the district championship, Mox gets a letter from Brown University, and he finds that he has been accepted on a full academic scholarship. However, after he finishes the last practice session with his team that afternoon, Kilmer speaks with him alone and warns him that, if he disobeys him in any way during the game, he will screw with his transcripts and get his scholarship revoked. That night, Mox visits Julie (Amy Smart) and apologizes for any emotional harm he has caused her since becoming the starting quarterback, and also tells her about his acceptance into Brown and how Kilmer is threatening to take it away from him if he doesn’t play by his rules tomorrow. He then vents to her that he doesn’t want to give Kilmer the pleasure of victory and preserve his exalted status in West Canaan, and worries about future players he will coach and Kyle possibly being one of those players. Julie tells him that he needs to stop whining, step up, and be a hero.

After the first half of the game concludes, the Coyotes are losing 14-7, and Wendell has sustained a torn ligament in his wonky left knee. In the team’s locker room, Kilmer tries to persuade Wendell to take an injection of a strong painkiller into his knee to deaden the pain and enable him to continue playing, not caring about Wendell possibly worsening his injury by doing so. However, Mox barges in before the injection can be administered and warns Wendell against it, thinking about how Lance made similar mistakes with his knee and now will likely never play again, and then Lance himself and Billy Bob second Mox’s protest. Mox then rebukes Kilmer over how he cares nothing for him and the other players, only for winning games and titles, and then quits as a means of keeping the needle from entering Wendell’s leg. Kilmer orders Tweeter to take over as quarterback, but he refuses, opting to stand by Mox, and Billy Bob in turn does the same. Mox tells Kilmer that the only way they are going back onto the field is without him, and realizing that this will result in the Coyotes having to forfeit the game, Kilmer loses control and attacks Mox. The other players quickly pull him off him, and despite knowing that he has now just lost all credibility in his team’s eyes, Kilmer tries to get their support and their trust in him and follow him back out to the field, but no one does after he exits the room. Defeated, he walks into his office and begins to pack up his stuff, having decided to quit.

Meanwhile, Mox gives a rousing speech to his teammates to go back out there and give it their all for the rest of the game and end it like heroes, and they return to the gridiron with Lance taking over coaching duties. The Coyotes play their hearts out, and when it gets down to the last seven seconds of the game, the Mustangs are leading 17-14. Mox gets hand signals from Lance to do the “hook and ladder” play where Billy Bob will score the touchdown, which makes the team nervous because they practiced it once before and it didn’t end well. They do the play anyway, and Billy Bob gets the ball and scores the six points, winning the district title for the Coyotes. After the team and their supporters flood the field to celebrate, Mox shares a kiss with Julie.

Mox narrates that the game ended without some of the players knowing that they became heroes, and though it ended up being the last football game that he ever played, he would never forget that day because it was all theirs. He adds that he took his scholarship to Brown, Lance would go on to become a football coach, and Wendell was accepted into Grambling University. Kilmer never coached again, but his statue remains on West Canaan High’s field (though that is only because it’s too heavy to move). 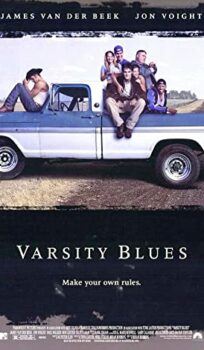