Pooper:
Venom and Brock work together to stop Riot and Drake. Venom decides to stay with Brock and Brock decides to teach Venom how to work with him.

Six months later, Drake begins testing the symbiotes on humans in an effort to enable extraterrestrial colonization. All trials result in the hosts being killed by the parasites. Brock is let into the LIFE Foundation by one of the research scientists, and bonds with a symbiote that he breaks out of a chamber. The symbiote gives him superhuman strength, agility, and instantaneous healing abilities. He eventually realizes that this symbiote is a sentient organism that calls itself Venom.

The Riot symbiote makes it way to San Francisco via a child host, and bonds with Drake when he realizes Drake is the one who can help him bring more symbiotes to earth.

Drake finances a rocket that he plans to pilot himself with Riot. After initiating the takeoff sequence, Riot kills all workers in the LIFE Foundation. Venom and Riot fight on the runway, eventually separating from their hosts, allowing Brock and Drake to fight hand to hand. Drake reabsorbs Riot, resulting in the two making it into the ship after impaling Brock. Venom re-bonds with Brock, healing his wounds, and they kill Riot and Drake by tearing a hole in the jet as the rocket takes off. Venom narrowly survives.
A month later, Brock is working on a new project, he and his ex-fiancee are friendly, even though she is dating a hospital surgeon, and Venom decides to not kill Brock as the symbiotes generally do with their hosts. When Brock asks Venom what he can do, he responds. “WE can do whatever WE want!”

Mid-credits scene:
Brock interviews an insane murderer named Cassidy (Woody Harrelson) who promises that when he gets out of prison, there will be “carnage.”
NOTE FROM DAVID K: His name is a reference to the classic Marvel villain “Carnage”

End credits:
A scene from Spider-Man Into the Spider-Verse shows Miles Morales helping an unconscious Peter Parker get away from a masked assailant. 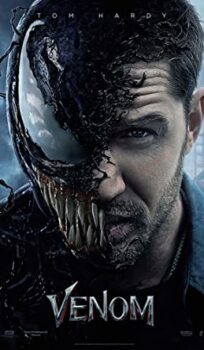