Eddie Brock (Tom Hardy) and Venom are now living together, albeit under strenuous circumstances since Venom is starving for flesh, but Eddie won’t allow him to eat people, no matter how bad they are. Adding to his troubles, Anne has gotten engaged to Dan, and the only person seemingly willing to talk to Eddie is serial killer Cletus Kasady (Woody Harrelson). After Venom helps Eddie and the authorities uncover the location of Cletus’s victims, the madman is set to be executed. Just before this, Eddie visits him one last time, and Cletus bites Eddie’s hand, allowing him to ingest Eddie’s symbiote-tainted blood. This causes Cletus to transform into the monstrous Carnage during his execution, and he breaks out to go and free his girlfriend Frances Barrison/Shriek, who has the power of supersonic screams.

Eddie and Venom break up before Carnage’s rampage, but after seeing the chaos brought about by Carnage and Shriek, Eddie realizes he needs Venom, while the symbiote realizes he misses Eddie. With Anne’s help, the two are reunited to go after Carnage, but the villains strike first and capture Anne, plus Detective Mulligan, who shot Shriek as a teenager and blinded her in one eye. The final showdown takes place at a cathedral where Cletus and Shriek try to get married and get revenge on their targets. Eddie and Venom power-up to fight back, leading to a big symbiote battle. Shriek seemingly kills Mulligan before Carnage tries to kill Anne. Dan helps Eddie and Venom fight by telling them they have a stronger bond than Cletus and Carnage. Venom knocks Shriek to her death, and her screams bring him and Carnage down, separating him from Cletus. Venom devours Carnage before taking a bite of Cletus’s head. He and Eddie part ways with Anne and Dan before the police show up. Mulligan is also potentially infected by whatever caused Shriek’s powers.

Eddie and Venom go into hiding, but end up transported to an alternate dimension, the same as the MCU Spider-Man, setting up his inevitable showdown with Venom. 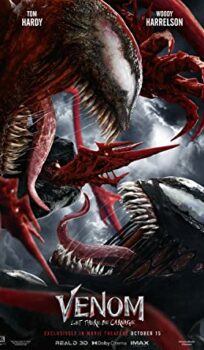