SHORT VERSION:
Parker ends up fighting Sid and kills him by ripping his software module out of his head. However, after Madison appears with Lindenmeyer and he gets mocked by the latter for ruining any chance he had of finding out where Sid is holding the former’s daughter captive, Parker returns with them to the LETAC lab and plugs the module into the VR simulator to confront Sid again in VR. Parker figures out where Karin is, but Sid attempts to kill him with a neural stimulation overload. Lindenmeyer tries to prevent Madison from getting Parker out, but she shoots and kills him. After she frees Parker, he takes the Sid module out, and they leave.

They return to the building where Parker killed Sid and locate Karin inside one of the air vents on the roof. They find her stuck with a more complex version of the explosive booby trap that killed Parker’s wife and daughter, and Sid has left a computer with a warning message to Parker stating that he has circumvented every possible method of deactivation. In the end, Parker takes out a wire from his mechanical arm and connects it to the input and output holes on the main operating system, putting the warning message on a loop and deactivating the trap.

Karin is brought out safely, and Parker throws the Sid module off of the roof, which smashes on the ground and kills Sid for good.

LONG VERSION:
Sid (Russell Crowe) ends up kidnapping Madison’s (Kelly Lynch) daughter Karin (Kaley Cuoco) and takes her to the IS TV network building, and he places her inside one of the rooftop’s air vents with a bomb that is set to go off in two hours. He then takes over the network as they are holding a broadcast with an unprecedented number of viewers and uses it to show off just how much of a sadistic madman he is, and shortly after Parker (Denzel Washington) and Madison arrive at the building, he shows Karin on the screen and goes into detail about the predicament she is in. Parker tells Madison to find the person in charge of the building and have him cut all of the phone lines leading into the building so Sid will lose his audience, and then he goes in to find Sid and Karin.

After Madison carries out Parker’s request, she spots Lindenmeyer (Stephen Spinella) – the man who created Sid and brought him into the real world – in the crowd watching the broadcast, and holds him up with a gun she brought. Parker enters the studio just as the lines are shut down and starts shooting at Sid, and Sid retreats to higher ground. They have a combined chase and shootout all the way to the roof, and there they have a hand-to-hand duel while Parker demands to know where Karin is. Parker ends up swinging down with Sid off of the roof and back down to a lower level, smashing through the window and sending Sid crashing onto a large glass display and impaling him with dozens of shards. As Sid attempt to regenerate his body with the glass, Parker rips the software module out of the polymer neural net in his head, resulting in his nanodeath.

Madison shows up with Lindenmeyer, and the latter mocks Parker for effectively losing any chance he had of finding Karin, but Parker proves him wrong by going to the LETAC lab with him, Madison, and his superior Chief Cochran (William Forsythe) and plugging the Sid module back into the VR simulator and going in with Madison. His earlier rooftop fight with Sid is re-enacted, but this time, Sid throws Parker off of the building to his apparent death on the ground. Madison confronts Sid and demands to know where Karin is, and Sid eventually points out where, but then Parker shows up and reveals to Sid that he is back in VR. Lindenmeyer then gets Madison out, but before Parker can be released, Lindenmeyer betrays Cochran by knocking him down and then bludgeoning him to death with a pipe. The enraged Sid attempts to kill Parker by causing a neural stimulation overload, and Lindenmeyer tries to kill Madison when she tries to get Parker out, but she shoots him dead with Cochran’s gun. She then gets Parker out before he can be killed, and after unplugging the Sid module, he and Madison head back to the rooftop.

Parker discovers that Karin is caught in a more complex version of the booby trap that Grimes (Christopher Murray) had used to kill his wife and daughter, and Sid has left a computer with a warning message to Parker stating that he has thought of every possible method of deactivation and circumvented them. However, in the end, Parker takes out a wire from his mechanical arm and connects it to the input and output holes on the main operating system, and this puts the warning message on a loop and deactivates the trap.

Parker and Madison get Karin safely out, and Parker goes up to the very top of the roof and throws the Sid module down onto the street below. It smashes on the ground, and then a passing car crushes the remains, killing Sid once and for all. 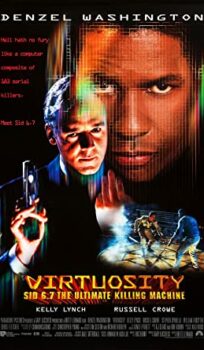