Although Fred goes on a winning streak in the casino, Wilma leaves him, appalled at his gambling addiction. Seeing how Fred lost Wilma, Chip rigs all the casino machines so that the players always lose, causing Fred to lose everything.

To prevent Barney from telling Fred to stop gambling, Chip has his girlfriend Roxey accompany him to the all-you-can-eat buffet. A misunderstanding involving a pie in her face and Barney attempting to clean her results in Betty believing Barney to be seeing another woman and she finds consolement in rock star Mick Jagged.

Wilma has her pearls put into the casino safe on Chip’s suggestion, but he later has them taken and plants them on Fred who now owes the casino over a million clams. Chip publicly exposes Fred’s “crime” and debt to Wilma. Fred tries to explain himself but Wilma is too upset to listen. Barney tries to convince everyone of Fred’s innocence, but Chip accuses Barney of being Fred’s accomplice and has them both locked up.

Wilma decides to get back together with Chip on her mother’s insistence and Betty decides to move away with Mick Jagged. Chip tells creditors from the mob that he’ll marry Wilma tonight to pay them his debts. In jail Fred and Barney are met by the Great Gazoo who exposes Chip’s plot to marry Wilma for her money. Fred realizes that Barney can fit through the bars and has him steal the key to release them.

Now hunted by casino security, Fred and Barney disguise themselves as show-girl dancers, but are quickly recognized. Escaping into Mick Jagged’s dressing room, Barney declares his love for Betty and the misunderstanding involving Roxey at the buffet is cleared up. Now understanding Chip’s true colors, Betty realizes that someone must warn Wilma. Angry that Betty and Barney are getting back together, Mick Jagged and Barney fight, ending with Barney smashing a guitar over him.

Disguised as Mick Jagged, Fred sings a song for Wilma and the audience even though everyone quickly realizes that he is not the rock star. In a heartfelt speech, Fred apologizes to Wilma and proposes to her. Knowing she still loves him, Wilma accepts. The crowd cheers to celebrate the couple’s new-found happiness, all except for Pearl, Chip, and the creditors.

Fred and Wilma are married at a Rock Vegas chapel. After the marriage, Wilma tosses the bouqet which is caught by Betty. The movie ends with everyone singing the “Flintstones” theme song. 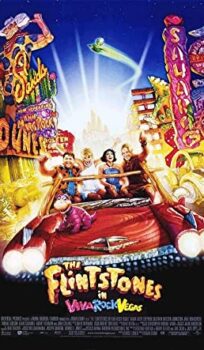