Pooper:
Gemma (Imogen Poots) and Tom (Jesse Eisenberg) die. The boy grows up and replaces the awkward realtor Martin (Jonathan Aris), from the beginning, as a new realtor who will lure other couples into Yonder, thus repeating the alien parasitic cycle all over.

Long version:
The presence of the boy takes a horrific toll on Gemma and Tom’s life; instead of a son, he behaves like a cuckoo, throwing scream-laden tantrums, acting monotonously and emotionlessly around the couple (while also strangely imitating their gestures) and feeding compulsively from their resources. He also grows at an abnormally fast rate and talks in a weird, otherworldly-sounding voice.

Time passes, without them being able to leave Yonder. One day, Tom figures out the ground is artificial and obsesses over digging and digging, non-stop, which further weakens and alienates him from Gemma. In turn, she tries to establish a bond with the boy, only to discover he has the traits of what seems to be an alien race.

Eventually, the boy grows to physically resemble a healthy human adult, while Gemma and Tom have wilted away. Tom, from all the digging, comes across a corpse in a body bag and dies, shortly after, while being comforted by Gemma. After the boy only provides a body bag -similar to the one seen by Tom- to put his body in and toss him into the hole, Gemma furiously tries to attack him and pursues him down what turns out to be a rabbit-hole-like display of other couples in distress similar to her own, with young boys who resemble the one they “raised”. It’s obvious, at this point, this is some sort of alien parasitic parallel world that lures couples into it, provides them with the cuckoo-like “child to raise” and survives by feeding on their suffering.

Then, Gemma is kicked out of the labyrinth, back into house #9. After confronting the grown-up boy, who reassures her that “she was a mother and was expected to die”, she succumbs to it and is put in a body bag, into the same hole, which the boy covers. He, then, dons a gas can to refill the couple’s vehicle, drives out of Yonder and reaches the real estate agency from the beginning of the film, to find a dying Martin -obviously at the end of his own life cycle-. He takes his name tag, puts his corpse in a body bag, folds it, disposes of it into what looks like a filing cabinet and gets ready to host a new couple that comes into the office and will likely end up having the same fate as Gemma and Tom’s. 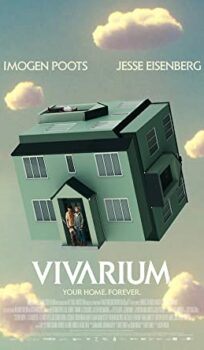