SHORT VERSION:
After Lawrence and At Toon rescue Beth from John and Chung Mee and get back to Luang Tha, the guys decide to flee since the two antagonists’ forces will be coming in the morning to take over the village and the bridge and they can’t call for help because the radio is busted. However, an offhanded comment from Lawrence prompts Beth to suggest that they blow up the bridge with dynamite they have, and the two men soon agree to do just that.

The trio meet with the other villagers to run this idea by them, and they give their approval because they never liked the bridge to begin with. Tom then appears wielding a lit stick of dynamite and babbling pro-Communist statements, but Lawrence manages to put out the fuse and then brings Tom back to sanity. Tom warns everyone that the Communists are coming to take over Luang Tha and the bridge as well, and when he is told about the plan to blow up the bridge, he says that they just have to place the TNT in the center of it to make it all collapse.

At dawn, Lawrence and everyone else set the dynamite in place just as John, his goons, and Chung Mee approach from one end and the Communists from the other, but when Tom pushes down on the detonator, a wire gets disconnected on the explosives. Lawrence runs back to the bridge and fixes it, but then finds himself confronted by John. He soon knocks John into the river (where he inexplicably vanishes) before jumping in himself, after which Tom detonates the TNT and destroys the bridge. Lawrence floats over to everyone and shares a kiss with Beth.

Lawrence writes a letter to his parents thanking them for enrolling him in the Peace Corps and how it has changed his life, then tells him of a plan he has to open a casino in the village.

LONG VERSION:
After the bridge is built, Lawrence (Tom Hanks) has a romantic evening with Beth (Rita Wilson) to celebrate the occasion, and after walking her back to her hut, she invites him inside. However, he refuses, saying that he doesn’t want to pull any of his old womanizing tricks on her because he genuinely likes her, though he does kiss her goodnight. However, after he walks off back to his hut, Beth enters hers to find John (Tim Thomerson) waiting in the darkness. John proceeds to reveal to her that he is not with the Peace Corps, but is a CIA agent who is part of a joint operation to eliminate the Communists in the jungle, and the bridge will make this an easier task. Also, Luang Tha is slated to become the site of an airstrip so the CIA can make strikes up and down the river. After Beth tells him that she disapproves of all of this, he sedates her with chloroform and then sneaks out of the village with her, but he fails to notice that a drunken At Toon (Gedde Watanabe) has seen him. When the bridge officially opens the following night, Lawrence asks At Toon if he has seen Beth, and when At Toon fails to give him a straight answer, he orders him to be honest with him. At Toon thus confesses that he saw Beth go into the jungle with John and believes that she has fallen for him, and this news angers Lawrence.

Just then, Chung Mee’s (Ernest Harada) car pulls into the village, and out of it steps his bodyguard, Lucille (Shakti), who has the $48,000 and a plane ticket back to the U.S. that Chung Mee had promised Lawrence in exchange for getting the bridge built in six weeks so he can move his drugs beyond the village. However, what Lawrence does not realize is that Chung Mee has actually sent Lucille here to kill him. When he gets some private time in his bar with her, At Toon interrupts a few times to try to warn Larry about Lucille having ulterior motives, but Lawrence refuses to listen. When Lucille does try to kill him with her elongated fingernails while he is fixing her a drink with his back turned, At Toon launches a kick from one side aimed at her, but he accidentally hits Lawrence, knocking him down and causing Lucille to get her nails stuck in the counter top and trap her. When Lawrence attempts to hit her with a liquor bottle in retaliation, she warns him that, if he touches her, Beth is a goner, and that she and John are with Chung Mee, exposing John as being in cahoots with him on something. Lawrence and At Toon decide to venture upriver to Chung Mee’s fortress to save her (off-screen, Lucille knocks herself out and ties herself up, according to At Toon).

Once they get outside the fortress’ walls, Lawrence has At Toon distract the burly guards at the front gate (a task made easy due to the fact that they all have a crush on him) while he sneaks in behind them. While making his way through the halls, Lawrence spots Chung Mee conversing with John, and he learns that, at 7:00 tomorrow morning, John and his forces will enter Luang Tha through the bridge and secure the area, and Chung Mee will be able to use the airstrip to fly his opium anywhere in the world. Lawrence finds a still-loopy Beth moments later, but then has to hide when he hears John coming. When John tries to take advantage of Beth, Lawrence tries to club him in a surprise attack, but John hears him and stops him. Lawrence holds back John as best as he can until At Toon suddenly appears and distracts John, enabling Lawrence to temporarily kayo him. He and At Toon pick up Beth and run, and John awakens and soon orders his men to find and kill the guys but keep Beth alive. Lawrence and company are able to lose the guards and escape the fortress.

When the trio get back to Luang Tha, Lawrence and At Toon decide that, with John and Chung Mee and their forces coming and them being unable to call for help since the radio got busted, they need to flee. However, an offhanded comment from Lawrence prompts Beth to suggest that they blow up the bridge with dynamite they have so that the antagonists’ plans will be ruined. Though At Toon immediately gets on board with this idea, Lawrence is none too happy with it, and out of worrying for her safety, he tells Beth that he loves her. However, after she convinces him of the necessity of this task, he concedes. They wake all of the villagers and bring them together in the town’s warehouse, and after Beth tells them that they need to blow up the bridge, all of the villagers give their permission to do it since they never liked the bridge in the first place. Suddenly, Tom (John Candy) comes in wielding a lit stick of dynamite and babbling pro-Communist statements. Moments later, At Toon kicks the dynamite out of his hand and Lawrence puts out the fuse while the other villagers restrain Tom, and then Lawrence slaps him repeatedly to undo the Communists’ brainwashing. Tom warns everyone that the Communists are coming in the morning to take over both the village and the bridge so they can spread their message to lots more people, and when Lawrence says that they need to blow up the bridge now, Tom informs him that they just need to strategically place the dynamite in the middle of it to make the whole thing collapse.

At the crack of dawn, Lawrence, Beth, Tom, and the villagers rig the TNT on the center of the bridge and connect it to a wire leading to a detonator, and they finish just as the Communists show up in the distance on one side of the bridge and John, his goons, and Chung Mee approach from the other end. Unfortunately, when Tom pushes down on the plunger, a wire gets disconnected on the dynamite, so Lawrence hurries back to the bridge to fix it. After doing so, he gets confronted by John, but he easily distracts him and then knocks him over the railing into the river (and his fate after this is left unknown). Lawrence then jumps into the river himself while Beth orders Tom to hit the detonator, so Tom does as instructed and the bridge is destroyed. Lawrence drifts over to Beth, and they soon kiss.

As Lawrence is seen one day walking arm-in-arm with Beth and being warmly greeted by the villagers, he narrates a letter he writes to his parents thanking them for enrolling him in the Peace Corps, and adds that he has learned the true meaning of self-reliance, commitment, and caring for another human being, and for the first time, he is doing the right thing and for the right reasons. He then tells his father about his plan to open up a casino in Luang Tha. 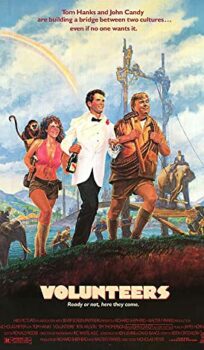