Recently paroled convict O2 (TYRESE GIBSON) is a single father who’s trying to do right for his young son, Junior. Accordingly he’s upset when his criminal-minded cousin Lucky (LARENZ TATE) doesn’t show to pick up the boy after school, thus meaning O2 must leave work to do so.

Heading back, however, he’s distracted by Coco (MEAGAN GOOD), an alluring street hustler, which results in him being carjacked and Junior being driven away. O2 gives chase and kills some of the bad guys, but can’t manage to rescue his son. Distraught, he confronts Coco at gunpoint, figuring she was in on the job, although she claims she’s innocent.

Sending Lucky out on the streets to find any sort of word about Junior, O2 receives the bad news that notorious drug lord Meat (THE Game) has the boy and is demanding a payment of $100,000 by the end of the week. Realizing they need each other’s help to get through their predicaments, O2 and Coco reluctantly team up to solve their problems.

With little time to spare, they set out to pit her criminal boss against Meat, all while knocking off banks and participating in other criminal endeavors that will enable O2 to pay the ransom and for Coco to start her life anew in Mexico. From that point on, they must contend with the various thugs who are after them as well as an increased police presence on the streets.

In the end O2 gets his son back and has a shootout with Meat, Meat suddenly pulls the trigger, but his gun only had seven bullets, O2 then shoots Meat four times. O2 then has to drive from the police, He decides to drive into the lake (which then everyone thought he drowned) Later we see Coco got her dream house and is taking care of Junior alone, Junior then sees someone in the distance and runs up and hugs him. 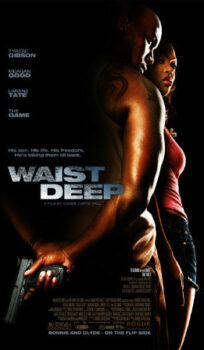