Pooper:
The virus from the first movie mutates to a virus that doesn’t kill humans, but renders them unable to produce words, essentially rendering them mute. When the Colonel realizes he has succumbed to the disease, he takes his own life. Caesar frees the apes but is shot with an arrow before escaping with them. The remaining humans either die or become mute like Nova. Caesar dies after bringing the apes to their new home.

Long Version:
Two years after the events of Dawn, a military group led by Colonel McCullough (Woody Harrelson) plot to destroy the forest home of the apes led by Caesar (Andy Serkis). The humans are aided by apes still loyal to Koba who want to see Caesar killed. After a battle at the beginning of the film, Caesar frees several of the Colonel’s men to deliver the message that the apes will not intrude on human territory if the humans leave the apes alone. Shortly after, apes Rocket and Blue Eyes (Caesar’s oldest son) return with news of a new habitat where the apes can live free, far away from humans.

That night, in an ambush, Blue Eyes and Caesar’s wife Cornelia are killed by the Colonel, leaving Caesar’s youngest son Cornelius as his only living blood relative. Rocket and Maurice the orangutan persuade Caesar that now is the time to move the shrewdness {this is actually the name of a group of apes. a troop is for monkeys, maybe hyperlink to a factsite or something?}, but Caesar chooses to set out on a revenge mission to kill the Colonel. While the other apes follow the map drawn by Blue Eyes, Rocket, Maurice, and the gorilla Luka accompany Caesar to find the humans. At the first human camp, they find Winter, the albino ape who betrayed Caesar’s location to the Colonel in exchange for mercy, not knowing it would lead to Caesar’s family being killed. Caesar kills Winter by choking him to death, then sets on track again. Along the way, the four come to a camp where they meet a young girl who cannot speak. Further along, they meet “Bad Ape,” a chimpanzee who learned how to speak after being exposed to the Simian Flu. The apes find the human camp, a former quarantine zone, where they discover the rest of their shrewdness captured and being forced to help the Colonel build a wall to protect them from the military forces on their way to stop the Colonel. Luka is killed by the Colonel’s forces when they arrive at the camp.

Caesar confronts the Colonel, who tells him that the Simian Flu has mutated to a form that does not kill humans, but instead takes away their capability to produce words, rendering them mute, and in the Colonel’s eyes, stripping their advanced humanity and making them nothing more than a primitive species. The Colonel tells of how he killed his own son when he succumbed to the disease and kills every human in his camp who shows signs of going mute from the flu. Caesar attempts to reason with the Colonel, only to be put in the quarry and forced to work with the other apes.

Rocket and the mute girl (who Maurice names Nova after a Chevy ornament they found), sneak into the camp, but Rocket gets captured so Nova can sneak back out. After sending signals to Maurice, Nova, and Bad Ape how to get the apes out of the camp, Caesar and Rocket prepare their escape.

The apes finally free themselves from the camp just as the northern forces attack the Colonel’s base. Caesar accepts that his quest for revenge and inability to forgive the Colonel makes him like Koba, but continues to the Colonel’s quarters, where he finds the man drunk in bed, his gun easily within reach. As Caesar prepares to shoot the Colonel, he realizes that the Colonel as gone mute, becoming the thing he has been set on killing. Without forgiving him, Caesar chooses not to kill the Colonel, realizing that he has become what he hates most. The Colonel then shoots himself.

Outside, while the humans are fighting, Caesar is shot in the side by a crossbow arrow from one of the humans he had freed at the beginning of the film. A Koba loyalist gorilla then kills the soldier before being shot in the head by another human. Caesar leaves the camp just as the northern forces storm the facility. The explosions cause an avalanche from the nearby snowy mountain, and the humans are all buried under the snow and ice while the apes, Caesar, and Nova, escape.

Caesar hides his wound from the others as they finish their journey to the new ape home. As Caesar lets Cornelius go to play with the other ape children, Maurice notices Caesar’s wound. The two share a moment where Maurice promises to tell Caesar’s story to the young apes. Caesar slowly lays down, and the camera pans up as Rocket and the other apes realize that Caesar has died. 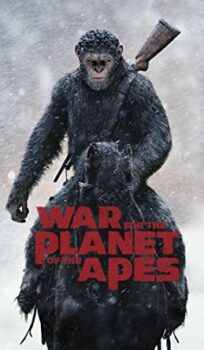