Master Chung (Chao Li Chi) is killed taking a negative Kung deathblow from Komodo (Angus Macfadyen) that was intended for Ryan (Mario Yedidia). However, his spirit aids Ryan in reading the Tao manuscript, which states that “five is one positive Kung”, and that “to take a life, you lose a part of yourself.” Through these words, Ryan realizes that Komodo temporarily lost his power after the deathblow attempt, and then he finds the Warriors of Virtue as they are battling Komodo and tells them the whole “five is one” deal. He then makes Komodo do another failed deathblow attempt, and immediately after, the Warriors raise their medallions high and call out their elements, turning themselves into a blast of fiery light that destroys the evil in Komodo and turns him into a peaceful person. Komodo’s men lay down their arms, and peace is restored to Tao.

Ryan is soon sent back to his own world at the moment where he was being goaded by Brad (Michael Dubrow) to cross the pipe above the whirlpool in the sewer, but this time he sensibly backs out. Just before he goes to sleep that night, he finds Ming’s (Dennis Dun) cocoon in a jar sitting on his windowsill, with a note underneath the lid reading “Spread your wings, Ryan,” and he sees a shooting star go by in the sky. 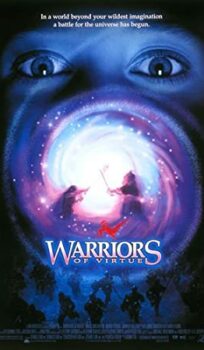