When Celia is born, her mother Eva (Tilda Swinton) notices that her son Kevin’s (Ezra Miller) negative behavior escalates. As he gets older, his continuous subtle hostility and stealthy mistreatment towards Celia increases.

Alarm bells really start ringing when Mr snuffles, (the family guinea pig) somehow ends up in the garbage disposal, followed by an ‘accident’ with bleach that leaves Celia blind in her left eye (with Kevin completely cold to this). This drives an ever widening wedge between Eva and her husband Franklin (John C. Reily), as Eva considers ending their marriage (as Kevin secretly overhears).

Days before his Sixteenth birthday, Kevin orders several bike locks. He claims he’ll be selling them to his classmates. Instead, he uses them to barricade all the doors at school, allowing him to put his archery skills to use on his fellow students. Eva shows up, just as Kevin is taken (smirking) into custody. When she gets home, she finds that Kevin used his sister and father for target practice, leaving them dead on the lawn, soaked by the sprinklers.

Two years later, on the anniversary of the school massacre, Eva asks him why? He states that for whatever reasons he had before, he no longer knows. 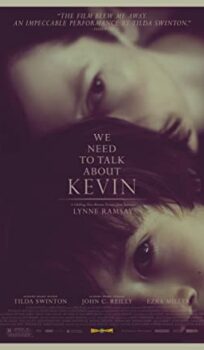