Gary and Wyatt (Anthony Michael Hall and Ilan Mitchell-Smith) are best friends in high school, but are total nerds and are inept when it comes to being cool or having other friends, especially girlfriends.

Gary sleeps over Wyatt’s house one Friday night while Wyatt’s parents and older brother, Chet (Bill Paxton), are away. Being bored and using Wyatt’s computer, they create a virtual reality hot chick they name Lisa (Kelly LeBrock). She can give them anything they want, and Lisa realizes they long for girlfriends and to be cool. So, Lisa throws a party at Wyatt’s beautiful home, against the boys’ wishes.

About two hundred kids from their high school show up, including Ian and Max (Robert Downey Jr. and Robert Rusler), two popular punks who are dating Deb and Hilly (Suzanne Snyder and Judie Aronson), two girls that Wyatt and Gary like very much.

Still, the boys are finding it hard to fit in during the party and hide out in the bathroom. So, Lisa devises a plan for them to be heroes. She conjures up a biker game from hell to invade the party. The bikers crash through the house with their bikes and cause terror and mayhem. Max and Ian desert their girlfriends and high-tail it out of there.

After a semi-tense showdown between the biker gang and the boys, Gary and Wyatt are victorious in saving Deb and Hilly (and the other teens) from the biker gang. They get the gang to leave by threatening to shoot the leader, the guy from the Road Warrior movie (Vernon Wells).

Since Max and Ian ran away when the trouble started, Deb and Hilly fall for their heroes, Gary and Wyatt.

With Lisa’s mission complete, she leaves in a cloud of smoke after blowing a tearful kiss goodbye to Gary and Wyatt. After she disappears, the trashed house and yard come back to normal, Chet returns to his normal self after Lisa turned him into what looked like a pile of crap (because he was such a jerk older brother to Wyatt), and Wyatt’s parents come through the door, just as the last piece of furniture is put back in place.

Gary and Wyatt are now dating Deb and Hilly and they are all in love.

On Monday morning, all the kids are talking about the infamous Gary and Wyatt party during gym class. Then, the new phys.ed. teacher comes out, and it’s Lisa. When they see her, everyone smacks their foreheads and collapses on the floor. 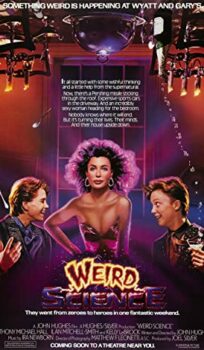