Chris (Robin Williams) finds out that an Asian woman he meets in Heaven, Leona (Rosalind Chao), is actually his daughter Marie (Jessica Brooks Grant) in a new form, and while journeying through Hell to find Annie (Annabella Sciorra), he figures out that Albert (Cuba Gooding, Jr.), his angel who was once a doctor Chris studied under and whom he considered to be like a father to him, is actually his son Ian (Josh Paddock). Ian took that form because he felt Albert was the only authority figure Chris listened to. However, the Tracker (Max von Sydow) orders Ian to return to Heaven while he and Chris carried on to find Annie. Ian didn’t want to leave his father, but he complies in the end, and in parting instructs his father to think about what happened when he and Marie died, and what Chris said to bring Annie back from her mental crisis.

When they reach Annie’s decrepit house, the Tracker reveals himself to be the real Albert, who had been waiting many years to do Chris a favor. He warns him that if he stays with her for more than several minutes, he may become permanently trapped with her. Chris enters the house and finds Annie, but he finds that what the Tracker said was right in that Annie doesn’t recognize him. Pale, gaunt, and miserable, she isn’t fully aware that she’s dead. He talks to her gently, pretending to be a neighbor, before he is able to gain enough of her trust to reach her for a moment. In guilt and disbelief, Annie screams and pushes him away, and a saddened Chris realizes he has failed. He gives his insane wife one last goodbye and leaves. Outside, the Tracker consoles him, and Chris tells him he has given up, but not in the way that he thinks: He has decided to stay with Annie. He tells him to tell his children he loved them, and re-enters the house, telling Annie that he won’t leave her. Somehow, this sacrifice reaches Annie, and she and Chris manage to both narrowly escape Hell.

After a series of memories, Chris awakens back in his home in Heaven, and finds Annie is there with him. She tells him “Sometimes, when you lose, you win,” and then the two kiss. The Tracker appears, and brings the family dog and children with him, reuniting them with Annie. When they are alone, Chris suggests to Annie that they should be reincarnated, so they can meet each other and fall in love all over again, and he got the kids’ blessing to do so, since life is but a heartbeat in Heaven and they would all be together again in no time. She agrees, and they are reincarnated, and they meet again as a young boy and girl down by a dock floating their toy boats. It is implied through Chris’ ending voiceover that they did what they set out to do through their reincarnation. 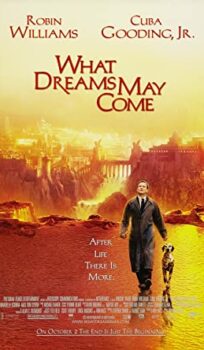