Turns out Beck’s Interface (Pat Corley) uncovers that a nuclear holocust shall occur due to a senator not casting his vote in congress on a bill to raise nuclear security (which was defeated by one) all due to his wife being hospitalized by a car owner who was in court over a parking ticket that he got in Lancon County Nevada.

Proof of a conspiracy was needed hence Travis Beck (Richard Grieco) being sent back in time he figures out Rifkin Koss (Tim Thomerson) and his assassins (Gary Lee Davis & Rick Cramer) were just back up, Bill Thermot (Mark Hamill) originally was sent to stop him, since his name was on the early parole release for one of said hitmen. A classic who draws first between Bill & Beck leads to Bill getting shot, as his body vanishes back in time.

Beck confronts Koss and both assassins in a shootout between pistol and ray guns, with both hitmen getting shot along with Koss, but not before Koss manages to wound Beck with a paralysing force field grenade. June Kelly (Cynthia Geary) manages to put the quater in the meter while her father Walter Kelly (Chad Everett)turns a remote controlled sniper rifle round to destroy the Assassin’s Interface(Joycelyn O’Brien). Beck having been beaten by jealous Tom Holtan (Matthew Mahaney), June’s Former Boyfriend, collapses in her arms and dissapears back in time.

Beck returns to continue a new relationship with June, who now no longer remmbers her previous encounter with him after he changes the past yet again to save her dad from a crippling car crash. 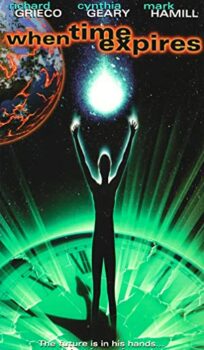