The longest title of any Oscar-nominated film.

Georgie Soloway (Dustin Hoffman) is a rich womanizing songwriter.  Someone he does not know, named Harry Kellerman, keeps calling people saying terrible things about George.  Women he meets dump him after getting calls from Harry Kellerman.  Georgie constantly thinks about suicide, and is seeing a psychiatrist.  Ironically, while Georgie writes love songs, he has failed at love in his life, and has never had a successful long term relationship.

Georgie sends money to his father, but the father always sends the checks back, uncashed.

Georgie flies his private plane over New York.  From the air, he calls some of his old girlfriends.  They don’t recognize his voice, and hang up.  Georgie is Harry Kellerman, and has been calling people saying the bad things about himself. 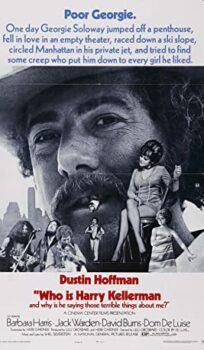