Simon (Joe Pesci) eventually returns the whole senior thesis back to Monty (Brendan Fraser), but Monty decides to take him into the home he shared with his crush Courtney (Moira Kelly) and friends Everett (Patrick Dempsey) & Jeff (Josh Hamilton), as he grew to become genuinely concerned about his well-being. Shortly after taking him in, Monty learns from Simon that the reason he coughed heavily so much was because he had asbestosis, brought on by inhaling a lot of asbestos while working in the Baltimore shipyards and on the Merchant Marine ship. Monty gets him hooked up with government disability benefits, and also takes him to a doctor, where he sadly learns that Simon was now in the last few months of his life. Monty also trashes his thesis, since he only wrote it the way he did to suck up to Professor Pitkannan (Gore Vidal) and his beliefs about the U.S. government, and begins to write a new one that reflects HIS beliefs about the government.

Simon grows on the other roommates over the next few months, and at a Harvard pajama party the day before Monty’s thesis is due, he encourages Monty to pursue his feelings for Courtney. The pursuit culminates with a kiss between them there and sex back at the house later on. However, later that night, Simon’s health takes a turn for the worse, and he asks for Monty and the others to take him to see his son Frank (Daniel Blinkoff), whom he abandoned back in 1963 to go work as a Merchant Marine, just so he could see him once before he died. They bring him to Frank’s home the next day (and in the process Monty fails to complete and hand in his thesis, but he doesn’t care about that), and though Simon does see him face-to-face, Frank rejects him. It also turned out he was a father himself, and Simon cries upon seeing his granddaughter (though she will probably never know Simon was her grandfather). Monty & company bring Simon back to their house, and he dies in his room shortly after they finish reading Leaves On Grass by Walt Whitman to him.

They have a funeral for him, where Monty reads the obituary Simon created for himself. Monty hands in his thesis late to Pitkannan, and Pitkannan re-affirms to him that he won’t be graduating with honors because of its lateness. Monty and his friends graduate, and he and Courtney kiss again as they leave the university. 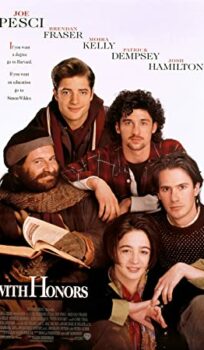