As a young woman, Maria Altmann (Tatiana Maslany) is forced to flee Austria, leaving behind a prized painting known as the “Woman in Gold”, as Nazi forces arrive. However, she is the only one to escape and her family is subsequently killed in the death camps.

As an older woman, Maria (Helen Mirren) partners up with a young lawyer, Randol (Ryan Reynolds) to get back the painting from Austria. The minister of Austria and the art director are unwilling to give the painting back as they feel that the painting has become part of their country’s identity. After the United States Supreme Court rules in favor of Maria, the Austrian government attempts to reach an agreement with Maria to retain the painting in their gallery, but Maria refuses.

After a falling out with Randol, Maria fires him. Randol goes back to Austria to argue the case in front of the art restitution board. Maria shows up and also argues the case. The board ultimately sides with Maria. In the final scene, Maria thanks Randol and tells him of her plans to have the “Woman in Gold” moved back to the United States with her. 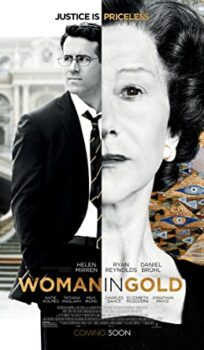