Ginny (Kate Winslet) and Harold “Humpty” Jablon (Jim Belushi) have their world turned upside-down by the arrival of Carolina (Juno Temple), Humpty’s daughter from a previous marriage. Carolina has been designated a “marked woman” by her Mafia ex-husband and seeks refuge with her father. Enter Mickey Rubin (Justin Timberlake), a lifeguard and aspiring playwright. He begins a summer fling with Ginny but ends up falling for Carolina instead. On top of all that, Ginny’s son Richie is a sullen ten-year-old pyromaniac.

When Ginny has a chance to warn Carolina that her ex’s hit men are coming for her, she hangs up the phone instead of finishing her call to the pizza place where Mickey and Carolina are currently on a date. The movie ends with Carolina’s disappearance and implied death, Mickey dumping Ginny, and Ginny staring off into space while her sad-sack husband Humpty falls apart. 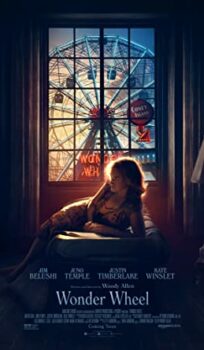