Hades (Ralph Fiennes) can’t go through with the plot to drain the power of his brother, Zeus, (Liam Neeson) in order to raise Kronos. This perturbs Ares (Edgar Ramirez) who had allied himself with Hades in order to free the titan Kronos from imprisonment in the underworld maze of Tartarus. Once free, Kronos would destroy the world.

With the help of Hephaestus (the redoubtable Bill Nighy), Perseus (Sam Worthington), Andromeda (Rosamund Pike) and Agenor (Toby Kebbell) find the entrance to Tarterus, journey to where Zeus is being held and with the help of Hades, they free Zeus.

Hades uses the remainder of his power to rejuvenate Zeus. Both Hades and Zeus, along with Andromeda’s army, try to hold off Kronos and his demons while Perseus battles Ares to recover Zeus’ thunderbolt. Zeus’ Thunderbolt, along with Poseidon’s Trident and Hades’ Pitchfork, when combined, form the Spear of Triam, which is the only weapon that can destroy Kronos. (Got it?)

Ares brings Perseus’ son, Helius (John Bell) to the Temple of the Gods, so the boy can watch Ares kill Perseus. Ares is mopping the floor with Perseus, but when Helius grabs Perseus’ sword to threaten Ares, this gives Perseus both the inspiration and the opportunity to defeat Ares. Perseus stabs Ares with Zeus’ Thunderbolt and then assembles the Spear of Triam.

Perseus rides Pegasus down Kronos’ throat and destroys Kronos using the Spear of Triam. Zeus dies protecting Hades from one of Kronos blasts and Hades, drained of power, leaves contritely. Agenor survives and Perseus kisses Andromeda. The film ends with Helios holding Perseus sword and the hope of a third film. 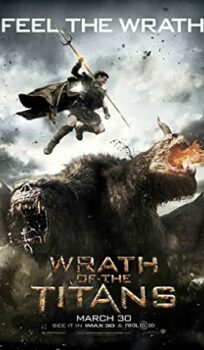