Pooper:
The mutant cannibal family are defeated and killed, but only Nina and Jake survive the run-in with the cannibals. The film ends with Three Fingers having survived his fight with Dale and raising the cannibal family’s deformed infant child.

Long Ending:
A survival reality TV show is being filmed in the woods of West Virginia near a long-abandoned paper mill. Hollywood “celebrity” Kimberly Caldwell (herself) is driving to the site of the shoot. She loses her cell phone and GPS signal and runs over a man while looking for a map. She goes to help the man when he suddenly recovers and bites her jaw off. She tries to flee but is killed by a second man. It is clear both men are deformed cannibals and unable to speak English.

We jump to the site of the reality show. The show is directed by a guy named “M,” and hosted by a former marine named Dale (Henry Rollins). The cast consists of a nice-guy jock named Jake (Texas Battle), the “slutty” model Elena, suicidal vegan Nina (Erica Leehrsen), X-games contestant Jonesy, and lesbian marine Amber. To fill Kimberly’s spot as she has not arrived (and never will), M convinces his girlfriend and producer Mara to be a contestant on the show.  Over the course of the show, Jake turns down Elena’s sexual advances, Jonesy and Amber befriend each other, and Dale is captured by some of the cannibals.

When Nina and Mara witness M cheating on Mara with Elena (in return, M promises to make Elena the star of the show), Mara runs into the woods and Nina follows. The pair find a cabin and enter in an attempt to find a phone as Mara wants to leave. While in the house, the clan of backwoods, mutated cannibals enter. They include Ma, Pa (Ken Kirzinger), Brother, and Sister. Sister gives birth to a deformed child as Mara and Nina watch on in horror (Brother is the father of this child). The pair are discovered and pursued by the cannibals and Mara is killed. Meanwhile, Three Finger (the surviving mutant cannibal from the first film) is preparing to kill Dale and prepare him for dinner. Dale manages to escape his shackles and, after a fight, shoots Three Finger.

Eventually, the cannibals attack the rest of the cast.  Elena is killed and M is abducted along with the RV that was the only vehicle on set. The remaining cast attempts to make it to the abandoned paper mill in an attempt to hide there until help arrives (eventually, someone at the production company will notice the TV show is not checking in). Along the way, Jonesy and Amber are killed (in a scene where Pa is clearly teaching Brother how to hunt similar to how regular fathers teach their children things). Meanwhile, Dale comes upon a house as he looks for other survivors. An old man living there explains that the cannibals were mutated by chemicals that leaked out of the paper mill. The chemicals have made the mutants incredibly durable and extremely hard to kill. Dale then discovers that the old man is the grandfather of the family and a fight ensues. Dale kills the grandfather and grabs weapons and dynamite from the grandfather’s house. He tracks Nina and Jake, the only surviving cannibals, to the paper mill.

It is revealed that the cannibal family lives in the paper mill. They capture Jake and Nina, bind them in barbed wire, castrate Jake, and force Nina to eat “dinner” comprised of her former castmates and crew (in an homage to the Texas Chainsaw Massacre). Dale then breaks in and the cannibal family pursues him. He manages to blow up Brother and Sister by shooting them with arrows with TNT attached. Dale releases Nina and Jake from their bonds before he is killed by a bereft Ma and Pa. The movie makes abundantly clear that despite being deformed cannibals, these people were indeed a loving family and that Ma and Pa are mourning the loss of their children.

Ma and Pa pursue Jake and try to throw him into an industrial tree grinder. Nina (who had been an utter coward to this point) comes back for him and manages to knock Ma and Pa into the tree grinder where they are ground to bits. Nina and Jake find Kimberly’s abandoned car and drive it to freedom.

Before credits roll, we see that Three Finger survived his gunshot wounds. He has Brother and Sister’s infant child with him and is shown nursing it with contaminated water from the paper mill and using a human finger as a pacifier. 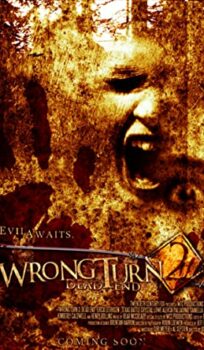