Pooper:
Brooke is reunited with Barry and fully harnesses her zombie powers (including the abilities to control other zombies and come back from the dead). The siblings begin attacking other military convoys to rescue other test subjects.

Long Ending:
Benny (Leon Burchill) goes camping with his two brothers in the Australian Outback and they see a bunch of shooting stars. The next morning, Benny awakens to find one of his now-zombified brothers eating his other brother. Benny shoots the zombie brother in the leg and flees.

Zombies begin manifesting throughout Australia. Barry (Jay Gallagher) is forced to kill his wife and daughter after they turn into zombies. Meanwhile, Barry’s sister Brooke (Bianca Bradey) is captured by soldiers after surviving a zombie attack. Barry, barely hanging on to his sanity, ends up meeting Benny. The pair decide to go search for Brooke.

Brooke is brought to a government laboratory where the Doctor (Berynn Schwerdt) is running experiments. He injects zombie blood into his hostages, including Brooke. After five injections, he kills the subjects and harvests their brain matter for further research.

Benny and Barry eventually befriend Kel and Frankie, who are hiding from the zombies in a large garage. The heroes discover that the zombie plague has also somehow rendered all flammable liquids inflammable. They soon learn, however, that during the daytime, the zombies emit a combustible and highly flammable gas from their orifices. After Kel is bitten and turned into a zombie, the trio build a contraption that allows the gas Kel emits to power their vehicle. The three set out to find Brooke. Frankie hypothesizes that the zombie plague is the result of the rapture and that the shooting star Benny saw at the beginning was the wormwood star that is prophesied to bring about the end of days in the Bible. Frankie is eventually bitten by a zombie on the journey, and Barry mercy kills him.

Barry and Benny end up meeting a group of soldiers driving a large electric-powered truck. They are the same soldiers that earlier captured Brooke. The heroes learn from the soldiers that anyone with A Negative blood is immune from the zombie plague (but can still be turned if they are bitten). The soldiers convince the pair to follow them to where they claim Brooke is staying (but actually intend to make the pair the Doctor’s new test subjects). At the same time, Brooke realizes she has developed supernatural powers allowing her to control zombies. She uses the powers to have the zombies in the lab attack the Doctor and free her from her bonds. Brooke opens the door of the lab…. to find that the lab is contained inside the truck the soldiers are driving and that Barry is following. Barry and Benny help Brooke escape from the soldiers, though Benny is shot in the process.

The soldiers eventually catch up to the escapees and a firefight ensues. Benny is eventually killed and Brooke is seemingly killed after the Captain (Luke McKenzie) shoots her in the chest. The Captain and Barry fight, with the Captain getting the upper hand. The Captain rants and raves, claiming that Barry is preventing them from getting the zombie apocalypse under control. Just before the Captain goes in for the kill, Barry realizes that the Captain’s head is covered in zombie blood. He throws a match at the Captain’s face, which lights the flammable bloon on fire. Brooke resurrects herself using her supernatural powers and then commands a number of nearby zombies to devour the scarred Captain.

The film ends with Brooke and Barry intercepting a military truck. The soldiers refuse to release their prisoners, so Brooke commands a horde of zombies to eat them. 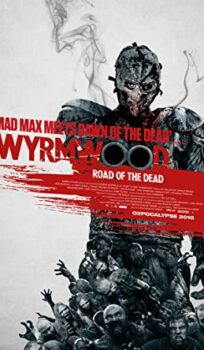