The film’s writer/director RJ is stabbed to death by Pearl after she comes onto him and he rejects her. The executive producer, Wayne, is stabbed in the eye with a pitchfork. RJ’s girlfriend Lorraine is trapped in the cellar by Howard and tries to escape, but Howard severs one of her fingers when she tries. Two of the actors, Jackson and Bobby-Lynne, are killed by Howard and Pearl, respectively, when Howard shoots him in the chest with a shotgun and Pearl pushes her into the lake to be eaten by an alligator.

The film’s other actress, Wayne’s girlfriend Maxine, manages to hide from the couple. Although she frees Lorraine in an attempt to escape, Lorraine gets shot in the face by Howard, who then suffers a fatal heart attack trying to carry her body inside. Pearl tries to shoot Maxine, but the recoil from the gun causes her to fall and break her hip. Maxine gets the van keys and runs over Pearl’s head. 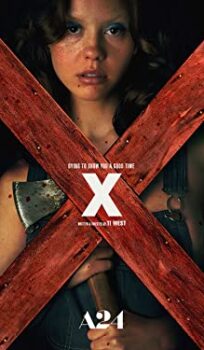